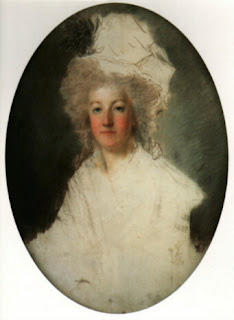 After their failed flight to Varennes, the royal family was brought back to the Tuileries, where they were very closely guarded. Imbert de Saint-Amand, in his book, Marie Antoinette at the Tuileries, 1789-1791, describes just how tight security had become:

THE next morning after the return from Varennes, June 26, 1791, the Dauphin said on waking: “I had a frightful dream. I was surrounded by wolves and tigers and savage beasts that wanted to eat me up.” It was not the child only, but the whole royal family, which had been violently disturbed by the shock of the fatal journey. They awoke captives in the Tuileries. They could form no illusions on that head. The palace was a prison. Wishing to assure himself if he were really a captive, the King presented himself at a door where a sentry was on guard.
“Do you recognize me? ” asked Louis XVI.
” Yes, Sire,” replied the sentry.
And the King was obliged to go back.

The master of the Tuileries was no longer the sovereign, but M. de Gouvion, the major-general of the National Guard and the executor of M. de Lafayette’s commands. He had asked for and obtained the right to take whatever precautions he deemed necessary, and notably that of walling up several doors in the interior of the palace. No one could enter it without a card of admission obtained from him. Even those engaged in the domestic service of the royal family were searched on going out and coming in. Madame Elisabeth wrote to Madame de Bombelles, July 10: ” They have established a sort of camp beneath the windows of the King and Queen, lest they should jump down into the garden, which is hermetically sealed and filled with soldiers.” A real camp was, indeed, to be seen there, with tents and all else necessary to the installation of troops. Sentries were posted everywhere, even on the roofs.

The Queen’s women found the greatest difficulty in getting access to her apartments. It had been resolved that she should have no personal attendant except the lady’s-maid who had acted as a spy before the journey to Varennes. A portrait of this person was placed at the foot of the staircase leading to the Queen’s rooms, so that the sentinel should permit no other woman to enter. Louis XVI was obliged to appeal to Lafayette in order to have this spy turned out of the palace, where her presence was an outrage on Marie Antoinette. This espionage and inquisition pursued the unfortunate Queen even into her bedroom. The guards were instructed not to lose sight of her by night or day. They took note of her slightest gestures, listened to her slightest words. Stationed in the room adjoining hers, they kept the communicating door always open, so that they could see the august captive at all times. One day, Louis XVI having closed this door, the officer on guard reopened it. “Those are my orders,” said he. “I will open it every time. If Your Majesty closes it. Your Majesty will give yourself a useless trouble.”

Marie Antoinette caused the bed of her lady’s-maid to be placed close to hers, so that, as it could be rolled about and was provided with curtains, it might prevent her being seen by the officers. One night, while the maid was sleeping profoundly, and the Queen sitting up, the officer entered the bedchamber to give some political advice to his sovereign. Marie Antoinette told him to speak low, so as not to disturb the sleeping woman. She awoke, however, and was seized with mortal terror at seeing an officer of the National Guard so near the Queen. “Be calm,” Marie Antoinette said to her, “and do not rise. The person whom you see is a good Frenchman, deceived concerning the intentions and position of his sovereign, but whose language shows that he has a real attachment to the King.”

When the Queen went up to see the Dauphin, by the inner staircase which connected the ground-floor on which her apartment was situated with the first floor where her children and her husband slept, she invariably found his door locked. One of the officers of the National Guard knocked at it, saying, ” The Queen!” At this signal, the two officers who kept watch over the governess of the children of France opened the door. It was the height of summer. If, towards evening, the King and his family wanted a breath of fresh air, they could not show themselves at the windows of their palace without being exposed to the insults and invectives of the people who were on the terrace.

Every day, deputations from different quarters of the city, suspicious and determined to see for themselves what precautions were taken and what vigilance exercised, would arrive at the Tuileries. At night the King and Queen would be awakened to make sure they had not taken flight. M. de Lafayette or M. de Gouvion were roused up also, to warn them of pretended attempts to escape. The alarms were continual. August 25, Madame Elisabeth wrote: “To-night a sentinel who was in a corridor up stairs fell asleep, dreamed I don’t know what, and woke up screaming. In an instant, every guard, as far as the end of the Louvre gallery, did the same. In the garden, also, there was a terrible panic.” The precautions taken were so rigorous, that it was forbidden to say Mass in the palace chapel, because the distance between it and the apartments of Louis XVI and Marie Antoinette was thought too great. A corner of the Gallery of Diana, where a wooden altar was erected, bearing an ebony crucifix and a few vases of flowers, became the only spot where the son of Saint Louis, the Most Christian King, could hear Mass.

And yet, among the guards, now transformed into veritable jailers, there were to be found some well intentioned men who testified a respectful regard for the royal family, and sought to lessen the severity of the orders they had received. Such was Saint Prix, an actor at the Comedie-Francaise. A sentinel was always on duty in the dark and narrow corridor behind the Queen’s apartments which divided the ground-floor in two. The post was not in great demand, and Saint Prix often asked for it. He facilitated the short interviews which the King and Queen had in this corridor, and if he heard the slightest noise, he gave them warning. Marie Antoinette had reason, also, to praise M. Collot, chief of battalion of the National Guard, who was charged with the military service of her apartment. One day an officer on duty there spoke unjustly of the Queen. M. Collot wished to inform M. de Lafayette and have him punished; but Marie Antoinette opposed this with her usual kindliness, and said a few judicious and good-tempered words to the culprit. He was converted in an instant, and became one of her most devoted partisans.

The royal family endured their captivity with admirable sweetness and resignation, and concerned themselves less about their own fate than that of the persons compromised by the Varennes journey, who were now incarcerated. Louis XVI, instead of indulging in recriminations against men and things, offered his humiliations and sufferings to God. He prayed, he read, he meditated. Next to his prayer-book his favorite reading was the life of Charles I, either because he sought, in studying history, to find a way of escaping an end like that of the unfortunate monarch, or because an analogy of sorrows and disasters had established a profound and mysterious sympathy between the king who had been beheaded and the king who was soon to be so.

The sister of Louis XVI was like a good angel near him. Gentler, more pious, more resigned than ever, she possessed that supreme energy which comes from a good conscience and a fearless heart. It was in religion that the saintly Princess ever found strength, hope, and consolation. The sentiments of the Queen were neither less
touching nor less lofty than those of her sister-in-law. Marie Antoinette devoted a part of every day to the education of her children and that of an orphan named Ernestine Lambriquet, whose mother had been one of Madame Royale’s servants. The hapless sovereign adduced herself as an example of the instability of worldly grandeur. She taught her pupils to deprive themselves voluntarily, every month, of part of the money intended for their pleasures, in order to give it to the poor; and the children, worthy of their mother, considered this privation as a happiness.