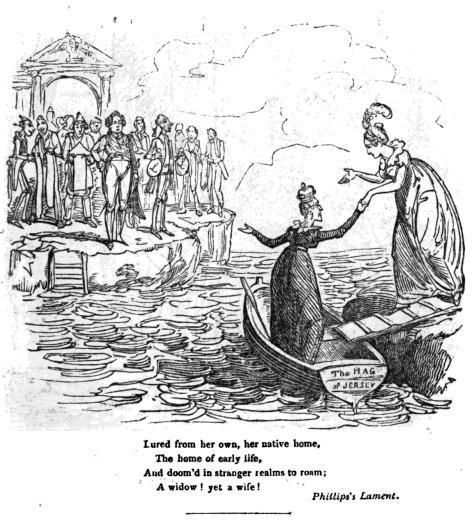 It was a match made in hell for George, Prince of Wales, and Caroline of Brunswick, which caused the bride heartache and humiliations from the very moment she set her foot on the English soil. Caroline, whose personal hygiene hadn’t improved at all during the long sea voyage that took her to her new home, arrived on board of the royal yacht August at Greenwich on noon on Easter Sunday. But there was no one there to greet her. Although the Prince of Wales had sent carriages, Caroline’s lady-in-waiting, whose job it was, according to protocol, to greet her mistress and escort her back to London, delayed their departure.

Lady Jersey wasn’t afraid to be reproached for this. She was the Prince’s mistress and had been appointed lady-in-waiting to Catherine thanks to him. Poor Caroline had to wait for an hour before the carriages arrived and when they did, instead than the warm greetings and apology she surely expected, she was criticised for her clothes. The Princess had never paid much attention to her appearance, but that day, thanks to the help of Mrs Harcourt, she looked better than usual in a muslin gown, blue satin petticoat and little black beaver hat decorated with blue and black feathers.

Lady Jersey insisted that this outfit was appropriate only for travelling in a carriage and that the Princess should instead be dressed as if she was about to be presented at court. And she said so in such a rude manner that Lord Malmesbury had to scold her for it. But in the end, it was Lady Jersey who won this battle and the Princess was forced to change into a tight white satin dress and a turban embellished with tall ostrich feathers that the lady-in-waiting had brought with her. Needless to say, this outfit was less than flattering on Caroline.

The royal party finally left for St. James’s Palace, where Caroline was to reside until the wedding day. Here the betrothed couple met for the first time. Malmesbury thus recalled this meeting in his diary:

She very properly, in consequence of my saying to her it was the right mode of proceeding, attempted to kneel to him. He raised her (gracefully enough), and embraced her, said barely one word, turned round, retired to a distant part of the apartment, and calling me to him, said, “Harris, I am not well; pray get me a glass of brandy.” I said, “Sir, had you not better have a a glass of water?” – upon which he, much out of humour, said with an oath, “No; I will go directly to the Queen,” and away he went…

The Prince may not have been impressed by his wife, but the feeling was mutual. Shocked by his rudeness, Caroline exclaimed: “My God! Is the Prince always like that? I think he is very fat, and nothing like as handsome as his portrait”. Caroline made no secret of how hurt she had been by this reception at dinner. The Prince was disgusted by her behaviour and her vulgar and coarse conversation. Instead than providing an occasion for a reconciliation, this dinner only managed to increase the dislike they already felt for each other.

Three days later, they were married.