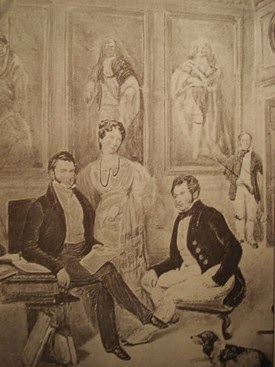 Georgiana, Duchess of Devonshire, and her best friend, Lady Elizabeth (Bess) Foster fell pregnant around the same time. It would’ve been a lovely coincidence if the babies didn’t share the same father, Georgiana’s husband William. Awkward. While Georgiana, as the legitimate spouse, was allowed to give birth to her second daughter Harriet in the comfort of her home, Bess was discreetly sent abroad. Her daughter Caroline Rosaline was born, a few days before Harriet, in an Italian hostel/brothel.

Bess wasn’t even allowed to raise her own daughter. Baby Caroline spent the first few weeks of her life with a poor family her parents didn’t know before being handed over to a respectable middle-class family. Years later, the ever persuasive Bess convinced the Comte St Jules to adopt her and give her his name.

Bess hoped to bring her daughter to England and raise her with Georgiana’s daughters, but the Duke had other ideas. He sent her to Paris, to be educated together with her other illegitimate step-sister Charlotte, who had been conceived shortly before the Duke’s marriage to Georgiana so that time at least he hadn’t, technically, committed adultery.

Bess eventually had her wish. Help came from the most unlikely of sources. Lady Spencer, Georgiana’s mother, had always despised Bess. But circumstances outside her control meant that, for once, Lady Spencer had to put her personal feelings aside. In 1790 Georgiana gave birth to her son Hart just outside Paris during the French Revolution. In her hurry to escape the country and bring her family to safety, Lady Spencer allowed the two illegitimate daughters of the Duke to go with her.

To be fair to Lady Spencer, she actually liked Caroline, whom she found to be very obedient. Georgiana’s friend Fanny Burney wasn’t so nice. She described the young girl as “fat and full of mincing little affections and airs.” Ouch! Her harsh judgement may have been influenced by her dislike for Bess. Mother and daughter were said to have similar personalities, which is probably why the young Caroline was her father’s favourite child.

Caroline’s illegitimacy and her unpopular mother didn’t prevent her from marrying well. The huge dowry of $30,000 bestowed on her by the Duke surely helped. So, on 17 May 1809, she married George Lamb, the son of Lady Melbourne and the younger brother of William Lamb, later Lord Melbourne. William had married Caroline Ponsonby, daughter of Georgiana’s sister Harriet.

To avoid confusion, the two Carolines were referred to as Caro William and Caro George. But while Caroline Posonby was very happy with her husband, Caroline St Jules’ marriage was a bitter mistake. The couple never had any children, and it was even rumoured that the marriage was never consummated.