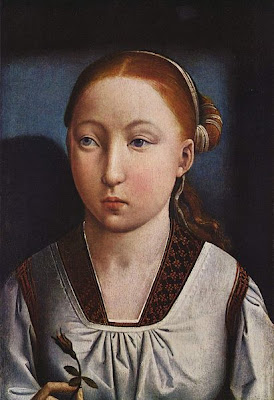 On 12 November 1501, Catherine of Aragon entered London. She was welcomed by cheering crowds while the King had organized a magnificent spectacle that was meant to awe the populace, charm the princess and herald a bright future for the country. Catherine was betrothed to the heir to the throne, Prince Arthur, and their marriage was supposed to legitimize the Tudor dynasty and bring stability and prosperity to England.

As usual in these occasions, there were several pageants. First, a young girl representing “Saint Catherine” appeared on London Bridge, carrying her wheel*. Next to her stood Saint Ursula, the daughter of a King of Brittany who had converted to Christianity. The second depicted Catherine as Hesperia (or western land; it was the name given to Spain by the ancient Romans), a bright evening star, and Arthur as Arcturus, the star that accompanied the birth of the Prince.

In the third pageant, the Archangel Raphael and King Alfonso of Castile, from whom both the bride and groom descended, announced a bright future for the couple. Other pageants compared the Tudor court to the celestial one. King Henry VII was compared to God, while Arthur to the “Son of Justice”, one of the many names given to Christ. Humility wasn’t really a Tudor characteristic. But people were also reminded that Catherine had English royal blood in her veins as she descended from John of Gaunt, from the House of Lancaster.

Noble princess, if this you’ll purse
together with your excellent spouse, then
with us you’ll reign in eternal prosperity

Catherine married Arthur two days later. But despite these happy and prosperous wishes, the marriage would be short-lived. Arthur would die a few months later, leaving Catherine a widow, and a virtual prisoner in England as the King refused to pay her dowry back to her father and kept postponing her marriage to his other son, the future King Henry VIII. The marriage would eventually take place, to end in a bitter divorce.

Note:
*Saint Catherine was condemned to die on the wheel, but that shattered when she touched it. So, she was beheaded instead.
** Translation from Italian is mine