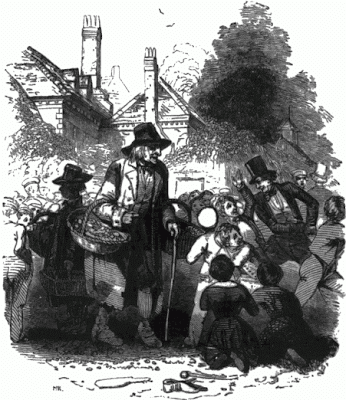 Creeling The Bridegroom was a curious wedding custom carried out in Scotland until the beginning of the nineteenth century. This tradition takes its name from the creel (basket) the groom had to carry around the town the day after the wedding. The happy couple and their friends would meet early and fill the creel with stones. Then, they’d tie it to the groom’s back and the poor man had to run around the town, followed by some of his friends to make sure he didn’t drop some of the stones off on the way. He would keep running thus until his wife agreed to kiss him. Only then he could stop.

It seems that, in Ayreshire, this custom was carried out a little differently. Here, the event took place two days after the wedding and the male friends of the couple would take turns to carry the creel full of stones. They’d allow the women to catch them and rewarded them with a kiss. At last, the creel was given to the husband, whom usually had to carry it for a long time before his wife decided to give him a kiss and put an end to the game. This custom represented the burdens a man takes on with marriage and which can be relieved by a good wife.

But not all new husbands were willing to be creeled. Robert Chambers, in his The book of days, Vol.1, published in 1864, mentions how one of those recalcitrant husbands put an end to this custom in the village of Galashels: “The practice, as far as Galashiels was concerned, came to an end about sixty years ago, in the person of one Robert Young, who, on the ostensible plea of a ‘sore back’, lay a-bed all the day after his marriage, and obstinately refused to get up and be creeled; he had been twice married before, and no doubt felt that he had had enough of creeling.”

Further reading:
Marriage Customs Of The World by George P. Monger
The Book Of Days, Vol.1 by Robert Chambers