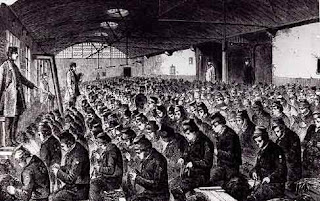 A few months ago, I posted an excerpt from Six years in the prisons of England, in which an anonymous merchant described his time in prison. At that time, our merchant was in the hospital wing for a leg injury, which was so badly cured that in the end there was no choice but to amputate it. Once he recovered, he was allowed to leave the hospital and join the other convicts in the prison cells. Let’s listen to him relate what life was like there:

My readers must now descend with me from the hospital, to what the convicts termed the twenty-four bedded room in the prison. In the cells and in the hospital, quietness reigned, but in the twenty-four bedded room it was different. Here the prisoners talked and conducted themselves very much as they felt inclined, and in the evenings the noise and tumult was sometimes beyond description. The inmates were constantly changing, some going upstairs to hospital, some coming from it, and every now and again there were fresh arrivals from other prisons. The daily routine observed here and in the similar wards was as follows:–

We started out of bed at half-past five a.m., summer and winter; washed, dressed, and made our beds, and two or three times every week assisted in scrubbing the floor. At six o’clock the officer opened the room door and counted us. At half-past six we had breakfast. About twenty minutes past seven we were ranked up in the corridor, and counted a second time. At half-past seven we were in chapel. At eight o’clock we were on parade and counted a third time. Those who worked outside and were receiving full diet went to their work. Those who worked inside walked on the parade until half-past eight. They were then ranked up and counted for the fourth time; and at nine o’clock all were at work.

In winter and spring, when the weather was cold, it used to be rather trying for me to stand so long on parade being counted. About an hour or an hour-and-a-half was spent in this way each day. Then the clothing of those of us who worked indoors was the same on the coldest day in winter as on the hottest day in summer. This was an excellent arrangement for keeping the hospital supplied with patients. I knew many who suffered from this cause, and some who attributed their death to the want of proper under-clothing. I felt the cold more perhaps than the others, as my hands were exposed holding my crutches, and my speed in walking could never get beyond that of a goods train, whilst my companions could run at express speed when it suited them.