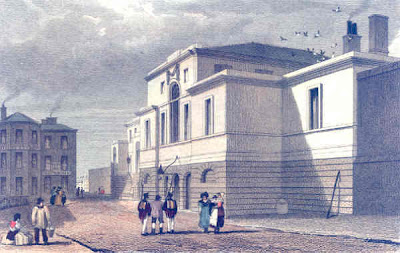 Six years in the prisons of England was written by an anonymous English merchant who committed a crime in order to save his business from bankruptcy. A robust and healthy man, his life in prison seriously injured his leg, causing him to spend years in the hospital ward. Sadly, the doctors, used to convicts pretending to be ill so that they could go to the hospital ward where they’d get better food and less work or even be released on medical grounds, didn’t take his condition seriously and in the end, the leg had to be amputated. In the book, he shares his harrowing experience and what life at the hospital was like:

The Surrey prison in which I was doomed to spend nearly five years of my life is a somewhat spacious looking building, situated in a healthy locality, and fitted up for the accommodation of about 660 prisoners. It is built in the shape of the letter =E=. The centre abutments are occupied as a chapel and work-room; the end wings are divided into cells, with an underground flat fitted up as a school and a Roman Catholic chapel. The upper story of the main portion of the building is divided into cells, which are the best specimens of the human cage yet constructed. The under flat is divided into eighteen rooms of various dimensions, some containing seven, others eight and twelve, and the largest twenty-four beds. The middle flat is in constant use as an hospital, and is divided into four wards, containing accommodation for 150 patients. Very frequently, however, while I was here that number was exceeded, and other portions of the prison were often appropriated to hospital use.
As I was for upwards of two years after my arrival an inmate of one of these hospital wards, I may here give an outline of the routine of our daily life there.

At half-past five every morning the great bell rang, and the nurses and convalescent patients started out of bed, washed and dressed, made their beds, rubbed their metal chamber-service as bright as silver–a remarkable contrast in that respect to the metal dinner dishes–dusted and cleaned the ward, which was usually kept remarkably tidy and clean. About half-past six breakfast was on the table. This meal consisted of very weak tea and dry bread for the majority, with an egg, or half-an-ounce of butter for the few who were supposed to be dangerously ill or dying. In the interval between the breakfast time and nine o’clock the patients’ wounds were dressed by the nurses, and medicines served out by the officers of the ward; those patients not immediately under treatment having liberty to read or chat with each other. Before I left, however, the attempt was being made to prohibit this reading and talking, and to combine more punishment with the cure of disease. 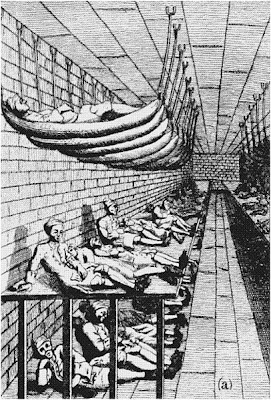 The two medical officers generally began their rounds of examination about nine o’clock. As they entered the room “Attention!” was called, when all the prisoners out of bed stood up, and as the doctors passed, noting down on a ticket the date and remarks on each man’s complaint, they were saluted by the patients in the military fashion. The doctors’ visit over, the patients were assembled for prayers; after which, and until the dinner-hour–a quarter to twelve–the time was spent in out-door exercise. From twelve till two the patients sat on their stools reading or gossiping. At two they went out again to exercise. At half-past three they were again assembled for prayers. About five they got tea and dry bread, as at breakfast; and at eight o’clock they were all in bed.The dinner of the patients varied according to the nature of their disease.

The majority were served with the regular hospital dinner, which consisted of soup, potatoes, and what the dietary boards called “Ten ounces of mutton.” With respect to the latter item, however, I fancy there must have been some mistake, although I have heard the prisoners characterize it in different and much stronger terms. Whether there be any mistake or not, five ounces, or it might occasionally be six ounces with the bone, is all the prisoners receive, and if complaint was made the invariable answer was, that it “Lost four ounces in the cooking.” I am not sufficiently skilled in the culinary art to be able to say whether or not ten ounces of mutton loses four ounces in cooking, but the great majority of prisoners did not believe it; and the evil effects of placing ten ounces on a board for the public to see, and five or six ounces in the dish for the prisoner to eat, are very great.