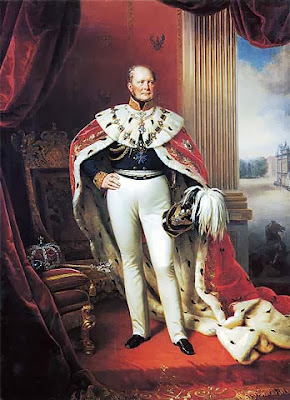 In a letter to her parents, Queen Victoria and Prince Albert, their eldest daughter Victoria discusses the death of King Frederick William IV of Prussia:

The Princess Royal to Queen Victoria and the Prince Albert
Potsdam, 2nd January 1861

Beloved parents, at last I can find a moment for myself to sit down and collect my thoughts and to write to you an account of these two last dreadful days! My head is in such a state, I do not know where I am hardly whether I am in a dream or awake, what is yesterday and what to-day! What we have so long expected is come at last! All the confusion, bustle, excitement, noise, etc., is all swallowed up in that one thought for me I have seen death for the first time! It has made an impression upon me that I shall never, never forget as long as I live and I feel so ill, so confused and upset by all that I have gone through in the last forty-eight hours, that you must forgive me if I write incoherently and unclearly.

But to go back to Monday evening (it seems to me a year now). At a quarter to eight in the evening of Monday the 31st, I took dear darling Affie to the railway station, and took leave of him with a heavy heart. You know I love that dear boy distractedly, and that nothing could have given me more pleasure than his dear, long-wished-for visit. At nine o’clock Fritz and I went to tea at the Prince Regent’s; we four were alone together. The Princess was rather low and unwell, the Prince low-spirited, and I thinking of nothing but Affie and of how dear he is. While we were sitting at tea we received bad news from Sans Souci, but nothing to make us particularly uneasy. Fritz and I went home and to bed, not being in a humour to sit up till twelve.

About half-past one we heard a knock at the door and my wardrobe maid brought in a telegram saying the King was given up, and a note from the Prince Regent saying he was going up immediately. We got up in the greatest hurry and dressed I hardly know how; I put on just what I found, and had not time to do my hair or anything. After we had hurried on our clothes we went downstairs and out for there was no time to get a carriage or a footman or anything it was a splendid night, but twelve degrees of cold (Reaumur). I thought I was in a dream finding myself alone in the street with Fritz at two o’clock at night.

We went to the Prince Regent’s, and then with them in their carriages to the railway station we four all alone in the train. We arrived at Sans Souci and went directly into the room where the King lay the stillness of death was in the room only the light of the fire and of a dim lamp. We approached the bed and stood there at the foot of it, not daring to look at one another or to say a word. The Queen was sitting in an armchair at the head of the bed, her arm underneath the King’s head, and her head on the same pillow on which he lay; with her other hand she continually wiped the perspiration from his forehead.

You might have heard a pin drop; no sound was heard but the crackling of the fire and the death-rattle, that dreadful sound which goes to one’s heart, and which tells plainly that life is ebbing. This rattling in the throat lasted about an hour longer, and then the King lay motionless. The doctors bent their heads low to hear whether he still breathed and we stood, not even daring to sit down, watching the death-struggle; every now and then the King breathed very fast and loud, but never unclosed his eyes; he was very red in the face, and the cold perspiration pouring from his forehead. I never spent such an awful time!

And to see the poor Queen sitting there quite rent my heart three, four, five, six, seven struck, and we were still standing there one member of the family came in after the other and remained motionless in the room, sobs only breaking the silence. Oh! it is dreadful to see a person die! All the thoughts and feelings that crowded on my mind in those hours I cannot describe, more than in my whole past lifetime. The light of the morning dawned, and the lamps were taken away oh, how sad for the first morning in the year! We all went into the next room, for I assure you, anxiety, watching, standing, and crying had worn us out. The Princess fell asleep on a chair, I on a sofa, and the rest walked up and down the room asking one another, How long will it last?

Towards the middle of the day, Marianne and I went into the room alone, as we wished to stay there; we came up and kissed the Queen’s hand and knelt down and kissed the King’s; it was quite warm still. We stood about and waited till five o’clock and then had some dinner, and I felt so sick and faint and unwell, that Fritz sent me here to bed. At one o’clock this morning I got up and dressed, and heard that the King had not many minutes more to live, but by the time I had got the carriage I heard all was over. I drove to Sans Souci and saw the King and Queen. May God bless and preserve them, and may theirs be a long and happy and blessed reign.

Then I went into the room where the King lay, and I could hardly bring myself to go away again. There was so much of comfort in looking at that quiet, peaceful form, at rest at last after all he had suffered gone home at last from this world of suffering so peaceful and quiet he looked, like a sleeping child. Every moment I expected to see him move or breathe his mouth and eyes closed, and such a sweet and happy expression both his hands were on the coverlid. I kissed them both for the last time; they were quite cold then. Fritz and I stood looking at him for some time. I could hardly bring myself to believe that this was really death, that which I had so often shuddered at and felt afraid of; there was nothing there dreadful or appalling, only a heavenly calm and peace.

I felt it did me so much good, and was such a comfort. “Death, where is thy sting? Grave, where is thy victory? “He was a just and good man, and had a heart overflowing with love and kindness, and he has gone to his rest after a long trial which he bore with so much patience. I am not afraid of death now, and when I feel inclined to be so, I shall think of that solemn and comforting sight, and that death is only a change for the better. We went home and to bed and this morning went there at ten. I sat some time with the poor Queen, who is so calm and resigned and touching in her grief.

She does not cry, but she looks heartbroken. She said to me : “I am not longer of any use in this world. I have no longer any vocation, any duties to perform. I only lived for him.” Then she was so kind to me, kinder than she has ever been yet, and said I was like her own child and a comfort to her. I saw the corpse again this morning; he is unaltered, only changed in colour, and the hands are stiffened.

The funeral will be on Saturday ; the King will lie in state till then. His wish was to be buried in Friedenskirche before the altar and his heart at Chariottenburg in the Mausoleum. Of course all will be done that he wishes. His servants are in a dreadful state. They adored him, and nursed him day and night for three years with the most devoted attachment. The King and Queen stay at Sans Souci till after the funeral, and Fritz and I here at Potsdam. . . .

Ever your most dutiful and devoted Daughter, Victoria

P.S. The funeral will only take place on Monday, and the body will be embalmed to-morrow. To-morrow evening there will be prayers at the bedside, and the day after the lying in state.