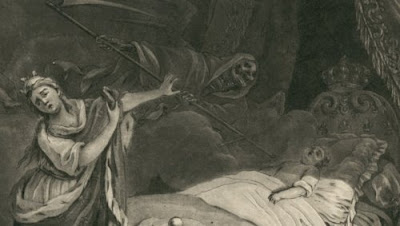 Madame de Lage de Volude, one of the Princess De Lamballe’s ladies-in-waiting, has left some touching accounts of the degenerative illness and death of the Dauphin Louis-Joseph, Louis XVI and Marie Antoinette’s eldest son.

“April 8th. This afternoon we went to see the little dauphin. It is heart-breaking. Such endurance, such consideration and patience go straight to the heart. When we arrived some one was reading to him. He had had a fancy for lying on his billiard table where they had placed his mattress. My princess and I looked at it, and it occurred to us both that it resembled the mournful state bed after death, Madame de Lamballe asked him what he was reading. ‘A very interesting period of our history, Madame: the reign of Charles VII; there were many heroes then.’ I took the liberty of asking if Monseigneur read connectedly or merely the most striking episodes. ‘Connectedly, Madame. I have not known them long enough to choose; besides, it all interests me.’ These were his very words. His beautiful dying eyes turned towards me as he spoke. He recognized me; he said in a low tone to the Due d’Harcourt that they had been told of the arrival of the princess, and that she had just come. ‘It is, I think, the lady who so greatly likes my map of the world.’ Then turning to me, ‘This will perhaps amuse you for a moment.’ He ordered a valet to turn it around, but I will confess to you that although when I saw it on New Year’s Day I had been delighted with the perfection of the immense machine, to-day I was much more interested in listening to that dear and unfortunate child whom we saw hourly growing weaker.”

Here’s a touching account of one of Marie Antoinette’s visits to her sick child:

“The poor child is so ill…. Everything the little one says is beyond belief; he breaks the queen’s heart; he is wonderfully tender to her. The other day he begged her to dine with him in his room. Alas! she swallowed more tears than bread.”

On 4th June 1789, the Dauphin passed away at Meudon. Madame de Lage, together with the Princess de Lamballe, was among the first to reach Meudon. Here’s how she described the sad visit to her mother:

“The coffin of Monsieur le Dauphin was open. I was at Meudon with the princess, to sprinkle him with holy water. Everything was white and silver and in the room in which he lay the light was brighter than anything I had ever seen. His crown, his sword, and his orders lay on the small coffin covered with silver cloth, and two rows of monks on each side prayed continually, day and night.”

The royal family wasn’t given much time to mourn. The country was in turmoil and less than two months later, the French Revolution would officially start.