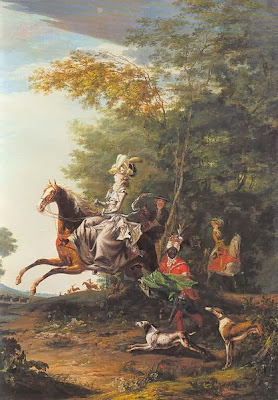 When dauphine, Marie Antoinette was fordibben from riding horses in case she should fall and have a miscarriage (despite the fact that her marriage hadn’t been consummated yet). So, she had to ride donkeys instead:

She had conceived a great desire to learn to ride. Her mother had been a great horsewoman; and, as the dauphin, like the king, was passionately addicted to hunting, which hitherto she had only witnessed from a carriage, Marie Antoinette not unnaturally desired to be mistress of an accomplishment which would enable her to give him more of her companionship. Unluckily Mercy disapproved of the idea. […]

He wrote to Maria Teresa, who agreed with him in thinking it ruinous to the complexion, injurious to the shape, and not to be safely indulged in under thirty years of age; and, lest distance should weaken the authority of the empress, he enlisted Madame de Noailles and Choiseul on his side, and Choiseul persuaded the king that it was a very objectionable pastime for a young bride.

There was not as yet the slightest prospect of the dauphiness becoming a mother (a circumstance which was, in fact, the most serious of her vexations, and that which lasted longest): but the king on this point agreed with his minister, and after some discussion a compromise was hit upon, and it was decided that she might ride a donkey. The whole country was immediately ransacked for a stud of quiet donkeys.

In September the court moved to Compiegne, and day after day, while the king and the dauphin were shooting in one part of the woods, on the other side a cavalcade of donkey-riders, the aunts and the king’s brothers all swelling Marie Antoinette’s train, trotted up and down the glades, and sought out shady spots for rural luncheons out-of-doors; and, though even this pastime was occasionally found liable to as much danger as an expedition on nobler steeds, the merry dauphiness contrived to extract amusement for herself and her followers from her very disasters.

It was long a standing joke that on one occasion, when her donkey and herself came down in a soft place, her royal highness, before she would allow her attendants to extricate her from the mud, bid them go to Madame de Noailles, and ask her what the rules of etiquette prescribed when a dauphiness of France failed to keep her seat upon a donkey.