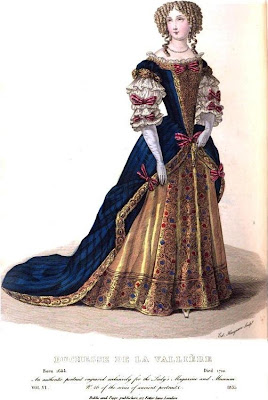 Louise De La Valliere was one of the mistresses of Louis XIV. Unlike other mistresses, she wasn’t interested in riches and titles, but only wanted the King’s love. When their relationship ended, she took the veil. Here are a few descriptions of the Duchess De La Valliere:

The complexion of the Duchess de la Valliere was very clear and blooming; she had a profusion of fair silky hair, and though her mouth was wide her lips were of a fine vermilion. The width of her mouth was the subject of frequent satire with the envious and ill-natured court of Louis XIV. A nobleman had the assurance to write an epigram on this defect, and the folly to present it with his own hand to the king:—this was the Count Bussy Itabutin. He got sent to the Bastille for his pains. This lampoon had been in circulation some years before without the slightest notice being taken of it by Louis, but the punishment followed the impertinence of thrusting it on the king’s attention. The count obtained his liberty in a few months, but was banished the court ever after.

The Princess of Bavaria, second wife to the Duke d’Orleans, although sometimes a coarse, was an honest writer; she thus describes the Duchess de la Valliere in her letters :—

“She had the most beautiful form in the world, and her mien was the most modest; nothing could be more touching or enchanting than the expression of her eyes. She was a little lame, but this defect, instead of injuring, seemed to add to her graces.”

Again, she says—” The Duchess dela Valliere was a person full of charms and attractions—good and sweet—tender—she loved the king, not through ambition, but with a real passion, true and excessive; and she never loved any one but the king.”

Such was the testimony of the king’s sister-in-law and friend, who was not only an eye-witness of the scenes played at court, but an acute and strong-minded judge of character. In another letter, Charlotte of Bavaria says—

“I find the eyes of Madame de la Valliere incomparably more beautiful than those of her rival, Madame de Montespan; for they have more of sweetness and sensibility in their regards than it is possible to describe.”

Madame de Genlis thus describes her —” Her large dark blue eyes were veiled by long black eyelashes. The purest white diffused over her face a delightful softness. Her smile, full of grace, was at once ingenuous, touching, and animated. Her shape was perfect, though an accident which happened in her infancy had rendered her somewhat lame, but even this defect had with her a grace. She could disguise it by walking slowly, and then her movement appeared suitable to the delicacy and modesty of her figure.”