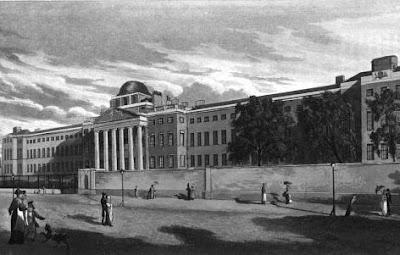 Bethlem Hospital, which is short for Bethlehem Hospital, is the world’s oldest institution for mental illness. It was founded in London in 1337 and although it already admitted some mentally ill patients from 1357, the treatment of these unfortunate souls will become the sole focus of the institution only years later. But Bethlem Hospital wasn’t just a place where you could lock mental people up for life like it may at first be thought. They actually tried to cure their patients. However, the purpose of this post is not to talk about their treatment (that deserve its own post) but about some particulars of the internal economy and rules. Who was admitted? How much did the hospital charge? And who could visit? The Repository of arts, literature, Fashions etc, August 1817 answers these questions for their readers:

This hospital is designed for the admission of all poor lunatics, except cripples and such as are afflicted with certain bodily diseases. Upon security being given that they shall be taken away when required, and have clothes found them, all admissible patients, except those from parishes and public offices, are admitted without fee or expense. Parishes and public offices pay three guineas for each, and enter into the same engagements. For incurables must be paid a deposit of five pounds, and nine shillings a week, besides their clothing; but if sent by poor friends, the weekly payment is reduced to six shillings. Patients remain till cured, or for twelve months, when they are to be discharged, unless there be then a prospect of cure.

According to the rules of this institution, no person whatever, except governors, or those in company with a governor, is to be permitted to view the hospital and patients; but the president or treasurer may give written orders for the admission of any member of either House of Parliament at convenient hours. The keepers and servants are forbidden to receive any fee or gratuity whatever, either from visitors or others, on pain of dismission. The official return of the state of this hospital as delivered to the lord mayor. according to custom. on Easter Monday last. was as follows: