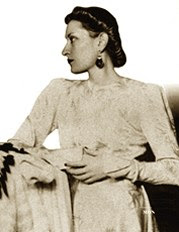 The Cianos were back in Rome. The Italian capital just wasn’t as exciting as Shangai, despite the fact it was undergoing a major transformation, with the construction of new monuments and streets inspired by the architectural styles of ancient Rome. But was the city really changing? Or behind this new facade were things still the same? Well, if not Rome, Europe definitely was changing and not for the best. It was at around this time that Adolf Hitler was appearing on the European scene. Edda was really happy when, in 1933, he was nominated Chancellor of Germany. She really admired him because, despite his humble origins, he managed to get to the heights of power (just like her father) and held in high consideration his work aiming at destroying the Republic of Weimer, which he eventually accomplished.

In addition, Hitler himself declared his profound admiration for Mussolini, proclaiming himself his pupil. However, Mussolini was worried about Hitler’s menacing and threating ways and even Galeazzo didn’t share his wife’s enthusiasm. When he learned of Hitler’s ascension to power, he put his hands in his hair and exclaimed: “My God, that’s a catastrophe!”. Galeazzo would never like and always distrust Hitler, but the Dux wouldn’t listen to him. Sadly, the future would prove how right Galeazzo was when uttering that exclamation. But that’s in the future. At present, the Ciano family doesn’t have its own house in Rome. They are staying with Galeazzo’s parents and their living together wasn’t peaceful: Edda just couldn’t stand her mother-in-law. Galeazzo didn’t help things either. He wasn’t working much and was just pacing restlessly around the house, driving Edda insane. She begged her father to give him a job, any job.

In all fairness, Galeazzo was given a few minor assignments, but was still at home too much. Eventually, Mussolini made him the minister of press and propaganda. And then, the couple also moved in a house of their own. Here Edda and her husband gave lavish balls and parties, where people could also gamble. It was also here they entertained Joseph Goebbels, the Reich Minister of Propaganda, when he visited Rome. Edda, who was pregnant at the time, was the perfect hostess and the visit was a success. At the end of that year, 1933, the couple’s second child, was born. It was a daughter named Raimonda, but everyone soon nicknamed her Dindina. But Edda didn’t spend a lot of time at home. She often went to Capri or Cortina with her children. Here too she would gamble and pile up enormous debts. Constantly in need of money and not wanting her husband and father to know about it, she asked for it to Mussolini’s secretary. He helped her out, very likely with Mussolini’s knowledge and assent. 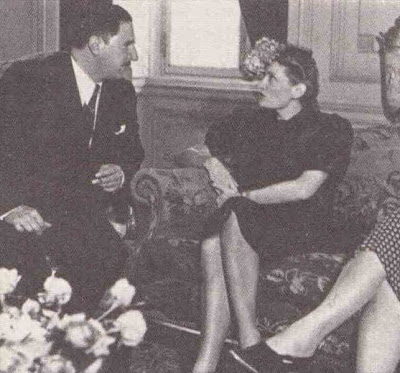 In the meantime, Hitler in Germany was becoming more and more aggressive. Both Mussolini and Ciano were worried about him wanting to annex Austria, fearing the Italian regions Lombardy and Veneto would be invaded next. They were also horrified by the murders of political opponents and the entire SA leadership, in what became known as The Night Of The Long Knives. An anti-Nazi campaign now broke out in Italy. Edda compared him to Attila and considered what he had done terrible, but she was still a supporter of his. Her friendship with Goebbels and his wife also continued. Mussolini, on the other hand, considered Hitler a madman, distrusted the Nazi and didn’t want anything to do with them at this point. Mussolini now wanted an alliance with France and the UK instead. But the latter were against his project to conquer Etiopia. So, Benito sent his daughter to London to make the English see he wasn’t gonna change his mind about it, no matter what they could say or do. The English didn’t seem to listen.

Only two people, in the month she spent in Britain, bothered to give a definite reply. Lord Rothemere, owner of the Daily Mail, supported the project; Ramsay MacDonald, the Prime Minister, was against it. But added that, if Italy was to go through with the plan, the UK wouldn’t do anything. Her mission was successful. Edda seemed to have a knack for this kind of missions and it seemed that all those who met her were fascinated by her. Because of it, both her father and her husband kept asking her to meet and influence in their favour important people. However, Edda didn’t show any interest for these missions whatsoever. In any case, Etiopia was invaded. Edda said goodbye to her husband and her brothers Vittorio and Bruno who left for Africa and the papers portrayed her as just an Italian woman who had loved ones fighting far away. But there were also those who kept criticizing the countess for her lavish parties and lifestyle.

Italy won the war after seven months but the economic sanctions imposed on the country by the League of Nations had the result to bring Mussolini closer to Hitler again. But the Germans distrusted the Italians and so Edda was sent on a diplomatic mission to Berlin to influence Hitler positively towards her father. She arrived there without much pomp and ceremony but things changed when news spread that her husband had been appointed Minister of Foreign Affairs. In Berlin Edda met Hitler. She had always been a supporter of his, but, before meeting him, she thought there was something artificial, almost ridiculous in his gestures and the way he behaved. But now she was fascinated by him. But then, Hitler knew how to be charming when he wanted to. Edda spent a month in Berlin, meeting people, going to parties and trying to bring the two countries closer. Slowly, the relationship between Italy and Germany was improving. 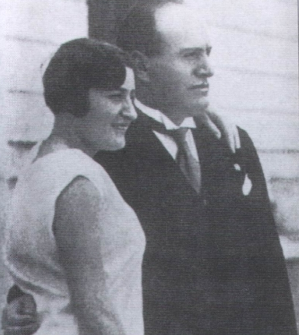 However, Galeazzo didn’t approve of this. He thought Italy should seek an alliance with the UK, which was against both hers and her father’s wishes. But working for Mussolini, he couldn’t abandon the alliance with Germany either and this contradiction caused him lots of worry, doubts and distress. It also affected his marriage. To avoid rows and contrasts with her husband, Edda would spend more and more time away. Whenever she felt like it, she would just leave with whomever she wanted. In addition, neither of them was faithful to the other and for a short while, she even considered dumping him. But Mussolini would never have allowed it. As long as a husband maintained his wife and didn’t fall in love with anyone else (sleeping around was ok though, according to him), a couple had to stay together.

In 1937, the couple had another child. The baby was called Marzio, a martial name inspired by the climate of war that was sweeping over Europe at the time and would, in a short time, bring about World War II. His nickname though was cuter: Mowgli. The following year, Hitler, who had annexed Austria to Germany and was getting ready to invade Poland, went to Italy to strengthen his alliance with Mussolini. According to the papers, this reconciliation was encouraged by Edda, implying that she had a great influence over his father’s political policies. She was considered the most influential woman in Italy, a role that should have belonged to her mother Rachele, and rumours about a French plot to kill her started circulating. But no one would assassinate Edda. It would be her husband, who had tried to convince Mussolini to break up his alliance with Hitler, who would be killed a few years later…