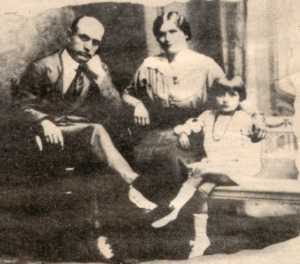 At about three in the morning on 1st September 1910, in Forlì’, the first daughter of Benito Mussolini and Rachele Guidi was born. The baby was given the name Edda Rosa Edvige. Rosa was the name of Benito’s mother, Edvige that of his younger sister. Edda, instead, was inspired by Hedda Glamer, a play by Ibsen and the Heroes of Carlyle and the adventures of princes in the Norwegian mythology. When Edda was born, her parents weren’t married yet because Mussolini was an atheist who disliked the Church and didn’t want to have anything to do with it (the child wasn’t even baptized). So, on her birth certificate, Edda was indicated as Mussolini’s illegitimate child and, instead, in the place of her mother’s name, only the letters N.N. appeared. Because of this, many thought that Angelica Balabanoff, a Russian Jewish socialist Mussolini had a relationship with in Switzerland, was her real mother. It wasn’t true but this legend would be often exploited for political reasons against Mussolini by his enemies.

Benito loved his daughter and she seemed to have a calming effect on him, but like any father, he was also anxious for his baby. When she was only a few days’ old and still sleeping in her parents’ bed, Mussolini wouldn’t move for the entire night for fear of squashing and hurting her. Pretty soon, he bought her a cot. If the baby wouldn’t go to sleep, Benito would start playing the violin to get her to sleep but with poor results. He would also play when the baby was already asleep, thinking the music would soothe her, but Edda would wake up and, once her dad had finished, scream for more. So he would turn the candle off hoping she would just cry herself to sleep. One night, though, the screaming went on for so long that Mussolini started throwing shoes, pillows, books and anything he could get his hands on at her cot!

When Mussolini’s father, Alessandro, died, Annina (Rachele’s mother and Alessandro’s lover) moved in with her daughter and her family. The Mussolinis were poor and so was their diet. Their meals consisted mainly of vegetable soups, while meat was rarely served on the table. Edda soon acquired the nickname “daughter of poverty” but nevertheless the family was relatively happy. Their economic situation improved when Benito started working at the “Avanti!” newspaper. But in 1911, Mussolini was jailed for five months, having advocated a general strike against the military expedition to Libya, and shared a cell with Pietro Nenni. When Edda with her mother Rachele visited them, the two men would hide messages in her clothes to communicate with their comrades.

Once out of prison, Mussolini became the editor of the Avanti! and the family moved to Milan. Because of their precarious economic situation they didn’t have the money to take their furniture in their new small three-room house in Milan and had to sell it. The house was so small that if Rachele wanted to have a bath, she had to go to a public bath. She would take her daughter with her but like many children, Edda didn’t like baths. She was a bit of a tomboy and a rebel, but could also be very generous. She had her father wrapped up around her little finger but her mother was stern and would even hit when she misbehaved. To avoid it, Edda would hide under the bed until her father returned home. 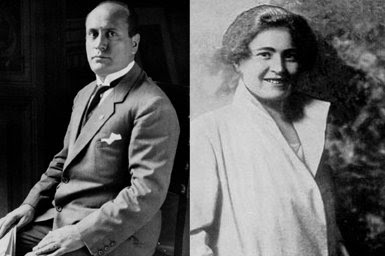 When she was older, Benito would take his daughter with him to work at the newspaper and even to party meetings. In 1914, World War I broke out. The socialist party was against Italy entering the war and initially Benito supported this view. Pretty soon he changed his mind as he saw in the war the opportunity to liberate North Italy from the Hapsburgs. His support for the war cost him the expulsion from the socialist party and his job at the newspaper. Soon, with the financial help of French socialists willing to support those that advocated Italy to join the war on France’s side, he founded another newspaper, “Il Popolo D’Italia”. Rachele and her mother Anna went to every newsagents in the area, asking them to make sure the paper was in a visible, prominent position. When Italy finally entered the war, Mussolini joined the arm and went to fight.

During the war, he had an affair with a woman called Irene Dalser who gave him a son. Even though she knew about Rachele, she believed Benito when he promised her he would marry her. Irene decided to face her rival and visited Rachele. The two women had a row in front of Edda, with Irene asking the child if her father really loved her mother! Irene also told everyone she was married to Mussolini and people believed her. When Benito got sick during the war, they notified Irene instead than Rachele. The woman rushed to his side with her son. Rachele had had enough! Together with her daughter, she managed to reach Benito before Irene and the couple were married in a civil, and secret, ceremony.

After the wedding, Rachele got pregnant again. On 27th September 1916, the couple’s first son, Vittorio was born. Edda was jealous of the newborn baby and the attentions he received from their parents. She started throwing tantrums, played tricks on everyone and even demanded to be breastfed like her brother! Because of her dislike of Vittorio, she wanted to join a tribe of gypsies that had temporarily moved near her place. She was fascinated by their roulettes, their picturesque clothes and hoop earrings, the music they played and the adventurous stories they told. Instead, her mother forced her to stay at home making scarves for the soldiers. She warned her the gypsies were nice to her because they wanted to kidnap her but Edda wouldn’t stop talking about them. One day, fed up with her daughter’s stubborness, Rachele told Edda she could join the gypsies. She rushed to the spot where they were staying at but they were gone. A pile of smouldering ashes was all they left behind.

Sad, she went back home but, on her way back, she was run over by a bike. She remained still on the ground, with blood pouring out from a wound on her eyebrow. She wasn’t seriously hurt, she was just obeying her father’s orders: never cry and never complain. She was taken to a doctor who wanted to apply stitches to the wound. This scared the little girl, who reacted by kicking the poor doctor on the chin, wounding him! Rachele would write to Mussolini, still fighting in the war, about this and other mischiefs, but he didn’t seem to be too worried about them and would just try to calm his wife down. I’m not sure it worked but Benito’s letters served another important purpose: Rachele would use them to teach her daughter to read.