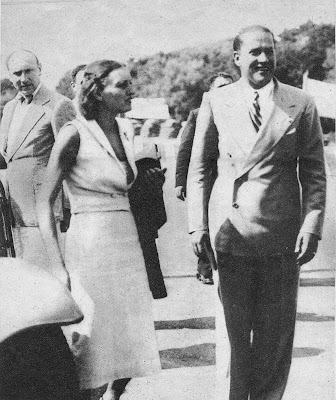 On 1 September 1939, World War II broke out. But Italy didn’t enter the war straight away. Its army wasn’t ready and its people against the war, so for the moment Mussolini had no choice but to declare that Italy would remain neutral. Edda thought this was a mistake. She wanted Italy to join the war on the side of Germany immediately, thinking that failing to do so would dishonour her country and render it uninfluential. She argued with her husband about it. Galeazzo, who had hoped until the last minute that Germany wouldn’t invade Poland, replied that she didn’t understand anything about politics.

However, Italy’s neutrality couldn’t last forever and, on 10th June 1940, Italy declared war on France and Great Britain. Very few people in Italy wanted this war but Edda was ecstatic. Germany was winning, and rapidly too, it seemed at the time and Mussolini thought that soon the war would be over and they victorious. As we know, things turned out very differently. And so the war started for Italy too. And while the civil population and the soldiers were suffering because of the war, Edda was still enjoying a lavish and spendthrift lifestyle and eating pasta, steaks and other foods that were rationed. Not even news of her brother Bruno’s death, on 7th August 1941, made her change her habits and ways.

However, after having supported Italy’s entry in the war, Edda in the end decided to be actively involved in it in some way. She enrolled as a Red Cross nurse, despite not having acquired the necessary certification for it*. She headed to the French front without telling anyone of her intentions which infuriated her father but soon Petain firmed an armistice and she was forced to go to the Greek-Albian front to offer her assistance. She was very active, often working 12-14 hours a day and was liked by both doctors and patients. But this job was obviously dangerous and she risked her life once, when the hospital ship on which she was served was bombarded (probably to kill her) by the British and sunk. Edda managed to survive, spending five hours in the water before being rescued. She also served as a nurse in Palermo, a city that had been heavily bombarded. She was horrified by what she saw: the population without bread for 6 whole days and no water for a month, wounded people lying completely naked in hospital beds, while the survivors where sleeping on the side of roads or near rocks.. She wrote to her father that she had never seen so much suffering and pain, not even in Albania and Russia. She also gave money, cigarettes, soaps and clothes, among other things, to people in need. These charitable works were encouraged by the Fascist regime which used them as propaganda. 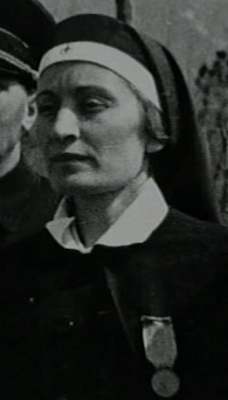 In 1942, Edda visited Germany again. At first the Germans, knowing her husband Galeazzo’s anti-Nazi sentiments, weren’t too happy about it but in the end decided that because Edda was still a supporter, they could find some ways to use her should the appropriate occasion arise. In Germany Edda visited the camps where Italian men had gone to work upon the request of the German government. She was horrified by what she witnessed here. The men were treated like slaves, were given only potatoes to eat and forced to work too much. In a hospital, she also found one of these workers, who had ended up there after being beaten severely by a watchman. She immediately related the episode to Hitler. The fuhrer seemed angry, ordering inquests and arrests but, like Galeazzo knew, things wouldn’t change.

During this time, Edda didn’t get on well with her father. She thought he demanded a too severe and austere behaviour from the soldiers and she felt sympathy towards the men who were returning from the front, saying they should enjoy life to the full before going back to fighting. But there was also a more personal reason that divided her from her father: she hated Claretta Petacci, Mussolini’s lover, and her family. She thought they were exploiting Claretta’s relationship with the Dux to further their own ends, make money and further their supporters’ careers. Several ministers were nominated thanks to Claretta’s influence, and thus gained the name of Claretta’s ministers. Edda was furious and would report their dodgy dealings to her father, telling him to stop causing scandals. Benito, who had had a bad row with Claretta, agreed and promised he would end their relationship. He kept his word but only for a week or so. Then, they got back together. And the closer he became to Claretta, the more distant he behaved towards Edda. Father and daughter spent months without seeing each other and when they talked, they often rowed.

Edda also blamed the Petacci’s clan for Galeazzo losing his job as Minister of Foreign Affairs in 1943. The real reason for the dismissal, though, was his anti-Nazi feelings. So it is odd that Ciano was next assigned as ambassador to the Holy See. It is true that this way, Ciano would have to stay in Rome where Mussolini could watch him closely, but in the Vatican Hitler and the Germans weren’t loved either. In the meantime, Italy and Germany were losing the war. There were those, including Ciano and the Vatican, who wanted Italy to sign a separate peace with the Allies forces and finally end the war, but Mussolini wouldn’t hear of it. He would keep fighting until the end. On 10th July 1943 the Allies soldiers landed in Sicily and started to liberate the nation.

It was now time to get rid of Mussolini. Ciano had been approached three years before already for that purpose but he wouldn’t betray Mussolini then. Now, things were rapidly degenerating and there was no time to lose. Other prominent members of the Italian Fascist government, such as Dino Grandi, were turning against him and so Mussolini had no choice but to summon the Grand Council of Fascism on 24th July 1943. Grandi asked to pass a vote of no confidence in Mussolini and allow the King to resume his full constitutional powers. The motion passed and the next day King Victor Emannuel III dismissed Mussolini, who was arrested, and replaced him with Pietro Badoglio. The country rejoiced. Galeazzo though was scared and, once reunited with his wife and children, who were in Livorno at the time of the vote, told them they had to leave Italy straight away or they would be killed. But where to go?

They thought to head to Spain first but the new minister of the Foreign Office refused them the necessary documents. Then, they tried the Vatican, but here too they weren’t welcome. It was now that Edda thought to ask the Germans for help. She still trusted them while Galeazzo thought that was an insane idea. But he didn’t really have any other choice. But the Germans told Edda that they would gladly help her and her children escape, but not her husband. Hitler hated him and wanted him to stay in Italy. Still, with their help, the whole family managed to safely leave the house and get into cars that led them to the airport. They got on a plane, thinking they would be safely in Spain soon, but the Germans had tricked them: the plane was heading North, to Germany, where they met Hitler. At first the Ciano family was well-treated here but after Italy had signed the Armistice, they became prisoners. It was here, while waiting for the false passports that would never come, that Edda finally opened her eyes and realised that Hitler couldn’t be trusted. But he kept one of her promises to her: the Germans, on 12th September, liberated her father, who was reunited to the rest of the family in Germany.

And straight away Hitler told him that, once in power again, he would have to sentence to death those who had voted against him at the Grand Council of Fascism, including Galeazzo. The fact he was his son-in-law only made the betrayal more serious, and thus more worthy of severe punishment, in Hitler’s opinion. Mussolini agreed to return to Italy where he set up the Italian Social Republic (also know as the Republic of Salò). Most of his family went to live with him, while Edda would occasionally go to visit him to plead her husband’s cause but to no avail. Finally, on 19th October, Galeazzo returned to Italy, but as a prisoner of the Republic, and was locked up in prison. Edda was allowed to write to and receive letters from her husband, but could seem him only rarely.

Edda fiercely defended her husband and pleaded her father to save him but he told her he couldn’t. No one would understand, he said, him sentencing to death all the men that had betrayed him and saving Ciano only. Both the Nazi and the Fascists still faithful to him wanted Ciano’s head and he felt he had no choice but give it to them. She had a furious row with her father, telling him the war was lost and that she didn’t consider him to be her father anymore. Edda now had only one other option to try and save Galeazzo. She offered to the Germans Galeazzo’s war diaries, which contained information they didn’t want to be made public, in exchange for her husband’s freedom. But this plan too failed. Ciano was tried and sentenced to death. He was executed, together with others who had voted for Mussolini’s ousting, on 11th January 1944. Edda was devastated. Betrayed by the father she had loved, by the trust she had felt in Hitler and Nazism, Edda, now a vidow, escaped to Switzerland with her children.

Notes:
* This certification had been denied to her by Princess Marie Jose of Savoy, who was the president of the Red Cross. To get it, it was necessary to complete an uninterrupted year of service and Edda hadn’t done that.