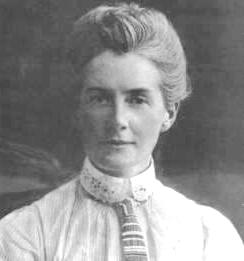 “Brussels will be haunted for ever by the ghost of this noble woman, shamefully murdered. I thought no act of our enemy could surprise me further. I was mistaken. This foul deed will live when great battles are forgotten.”

That’s what King Albert I of the Belgians uttered when he learned English nurse Edith Cavell had been executed. Up to the last, he thought the sentence wouldn’t be carried out. Both he and his wife Elizabeth did all they could to try and get her released since she was arrested, but it was all in vain. The Germans wanted to make an example of her. On 12th October 1915, Edith Cavell was executed in Brussels, an act that shocked the entire world.

Edith Luisa Cavell was born in Swardeston, a village near Norwich, on 4th December 1865. She was the eldest child (she had three siblings) of Reverend Frederick Cavell, vicar of Swardeston. Although the family wasn’t rich, they always shared what they had with those less fortunate than them and, from an early age, the children were taught to care for others. Edith also visited the poor with her mother and even become a Sunday School teacher. This need to help other people had a big influence on her life. 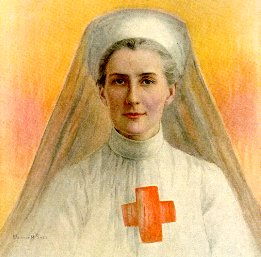 After she finished her education (she was educated at home first and, when she was about 16, attended several local and boarding schools where she learned French), she first became a governess. She worked for several families and they all seemed to like her. In the late 1890s she inherited a small amount of money and decided to take a trip to Austria and Bavaria. Here she visited a free hospital run by Dr Wolfenberg and, impressed with what she saw, donated some money to it. Then, she briefly resumed her governess work before returning home to nurse her sick father.

It was at this point that Edith decided she wanted to become a nurse and got her qualification at the London Hospital. The work was hard, the hours long and the pay bad, but nonetheless Edith showed she had a natural gift for the profession. She was awarded the Maidstone Medal for her work during a typhoid outbreak in Kent and in 1900 was appointed superintendent of Highgate Infirmary. In 1907 she was asked to run L’École Belge d’Infirmières Diplômées, a Belgian school for nurses. The profession wasn’t considered to be a suitable one for women in Belgium at the time and most nurses there weren’t trained. 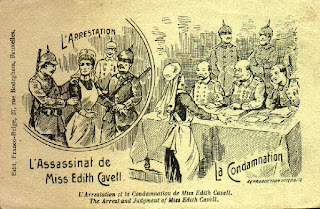 Edith accepted the job and introduced strict discipline, insisting on punctuality and cleanliness. She set very high standards and her hard work paid off. The school produced well-trained nurses for the country and was given the royal seal of approval when Queen Elizabeth asked for a nurse from that establishment when she broke her arm. Three years later, Edith launched a nursing journal called L’infirmière. She was visiting her widowed mother in Norfolk when World War I broke out. She went back to Brussels where she and her fellow nurses were busy taking care of all the soldiers that flooded into the hospital.

After the German occupation of Belgium, Edith helped British and French soldiers and young Belgian men to leave the country. She would often shelter them in the cellar of her own house until a trusted guide could be found to lead them to safety. She also invented ruses for getting them safely across. Soon an underground organization developed. Edith helped to save over 200 refugees before she was betrayed. On 3rd August 1915 she was arrested. She was kept in solitary confinement and interrogated but she revealed nothing. So, the Germans decided to trick her. They told her that her friends had confessed and that if she made a full confession they wouldn’t be executed. 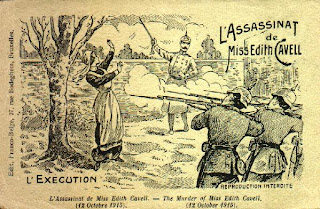 Edith naively believed them and confessed to have helped men escape to a country at war with Germany. According to German military law, this was a crime and its punishment was death. She was then court-marshalled. Her trial lasted only two days and the only other incriminating evidence was a postcard an English soldier sent Edith to thank her for her help. Edith was found guilty and sentenced to death by shooting. The British government couldn’t help her. “Any representation by us will do her more harm than good,” said Lord Robert Cecil, Under-Secretary for Foreign Affairs. Spain and America, both neutral countries in the war, tried to intercede pointing out that Cavell’s execution would only further damage Germany’s reputation, but the Germans decided to carry out the sentence anyway.

Edith seemed to accept her fate. The night before her execution she told the Reverend Stirling Gahan, the Anglican chaplain who had been allowed to give her Holy Communion, “patriotism is not enough, I must have no hatred or bitterness towards anyone.” On 12th October, she was killed. Her execution was a propaganda disaster for Germany. Although the Germans believed she had been given a fair trial and Edith herself said “I expected my sentence and I believe it was just”, she was hailed as a martyr and the Germans as murderous monsters. When the war was finally over, her remains, which had been buried next to St. Gilles Prison, were taken back to Britain. After a memorial service at Westminster Abbey, her body was brought back to Norwich and laid to rest at Life’s Green.