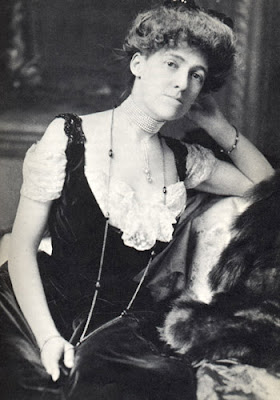 Edith Newbold Jones, the daughter of George Frederic Jones and Lucretia Rhinelander, was born on 24th January 1862. She had two brothers, Frederic and Henry Edward. The family was rich and when Edith was 4, travelled around Europe, visiting Italy, France, Spain and Germany. They returned to America six years later where the family spent the winters in New York and the summers in Newport, Rhode Island. Edith was educated by a governess. She learned history, science, art, philosophy, French and German. She always loved reading and writing. She wrote short stories and poetry from a young age and her first novel, Fast And Loose, when she was only 14.

Edith debuted in New York society in 1879. At 23, she married Bostonian banker Edward Robbie Wharton. Edward came from a similar social background, was attractive, kind and shared with Edith the passion for travelling and country life. However, he didn’t share the same artistic and intellectual interests as his wife and the marriage wasn’t successful. They both took lovers (Edith had an affair with journalist Morton Fullerton while in Paris) and the couple divorced in 1913. After the divorce, Edith settled permanently in Paris, returning to America only occasionally.

In the meantime, she started publishing her works. The Decoration of Houses (1897), cowritten with architect Ogden Codman was her first published work. During the years she wrote poems, short stories, writing on travelling, design and gardens, and several novels including The House Of Mirth (1905) and The Age Of Innocence (1920). Her works were heavily influenced by social and natural scientists like Darwin, Lock, Tyndall and Huxley. This influence is obvious in the use of language and themes she chose to write about. In her novels, Wharton portrayed the mores, values, social ambitions and changes, the conventionality and hypocrisy of New York society during the Gilded Age, using a style that was at times satiric and ironic.

Edith Wharton was in North Africa when World War I began. She was dedicated to the Allied cause and led a commitee that founded hospitals and schools for refugees and orphans in France and Belgium. She also helped women with no means of support to get jobs and raised funds for both these projects. Moreover, she travelled to the front lines to observe the fighting and tend to the sick, writing about this experience in a few essays. Because of this, in 1916 she was awarded the title of Chevalier in the French Legion of Honour.

In 1921 Edith travelled to America to receive the Pulitzer Prize for The Age of Innocence, published the year before. She went to America one last time in 1923 when she was awarded an Honorary Doctorate of Letters from Yale University. In 1930, she entered the American Academy of Arts and Letters. Edith Wharton died of a stroke on 11th August 1937 and was buried in the Cimetiére des Gonards in Versailles.

Further reading:
Edith Wharton’s World
The House Of Mirth
The Age Of Innocence