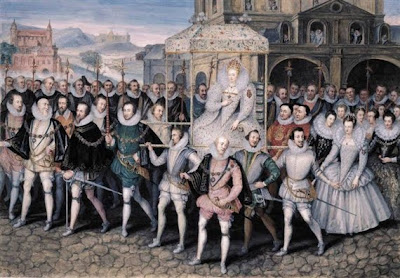 In the summer, when London became really hot and insalubrious, the Queen with her court went on royal progress throughout the English countryside. In the 45 years in which she reigned, Elizabeth I travelled through the Midlands, the Sussex, Kent, East Anglia and the West Country, visiting hundreds of cities and villages and staying at the magnificent houses that belonged to her nobleman. For many of her subjects, this was the only occasion to see their beloved Queen and, for a little while, to forget their troubles. The Queen, travelling in a golden silver carriage and wearing the most beautiful silk dresses and exquisite jewels on her hair and neck, would look like a goddess to the peasants. In front of her travelled the servants, the guards and the equerries, while the counsellors and her maids of honour were just behind her.

And wherever she went, the inhabitants made sure to give her a magnificent welcome. Houses and palaces were embellished, the streets and gardens cleaned, and the gallows removed. Thieves and prostitutes were either imprisoned or told to do their business somewhere else for the duration of the visit, and even mentally ill people were kept under lock. A stage for recitals, performances and welcome speeches was erected, and food and drinks were prepared. Everything had to perfect for the Queen’s arrival. When she finally arrived, the bells would ring, the musicians start to play and the orators give speeches to welcome their Queen, who would graciously thank them, accept their presents and watch the performances under all kinds of weather, rain included.

If the people loved these visits, the noblemen not so much. Travelling in the sixteenth century was full of inconveniences and if their houses were chosen to offer hospitality to the Queen during the trip, they would have to spend enormous amounts of money for repairs and embellishments as well as food, entertainments and everything else that was needed to offer a proper and royal stay to a Queen. There were even those who took the initiative to build or enlarge residences hoping the Queen would decide to stay there, but in vain! Pheraphs one of the most known visits Elizabeth I made during her royal progresses was her 3-weeks long stay at Kenilworth Castle, which belonged to her favourite Robert Dudley, in July 1575.

Dudley pulled out all the stops to impress her. He improved Leicester’s Building, a tower block of lavish apartments built specifically to house the Queen and which she had used in a previous visit in 1572. The gardens were also improved and the Queen spent a lot of time walking among the luxuriant trees and scented flowers, the shady bowers, arbours and seats. A private garden just for the Queen had been made too. Another favourite pastime of the Queen was hunting and the park and mere were full of wild fowl, deer and game. In the gardens, she also enjoying fights between dogs and bears. A magnificent firework display and plays were also organized for the Queen’s pleasure.

But the Queen didn’t completely forget her royal duties. While here, she also knighted five young man, including Thomas Cecil, Robert’s son. She also received nine ill people so that she could touch them and heal them. At the time, in fact, it was thought that a sovereign had thaumaturgic powers. But after 3 weeks, it was time to go. In a farewell speech, an actor playing “deep desire” (and which represented Dudley) urged here to live her forever:

“Live here, good Queen, live here;
You are amongst your friends.
Their comfort comes when you approach,
And when you part it ends.”

But leave she did and, until the end of the summer, she kept travelling throughout the country, visiting her noblemen’s country houses and hunting.