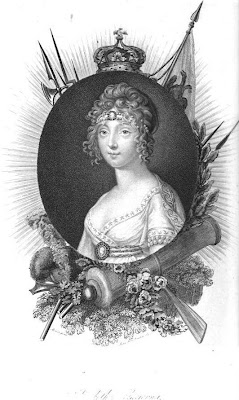 Elizaveta Alexievka, Empress of Russia, is one of the most handsome and interesting figures of her court. She is of the illustrious House of Baden-Durlacli, was born January 24, 1779, and on the 9th of October, 1793, was married to the Emperor Alexander, then Grand Duke. On embracing the Greek religion, at the ceremony of her re-baptism, by the hands of the Archbishop of Moscow, a rite indispensably necessary for all foreigners previous to their adoption into the Imperial family, the Empress Catharine II gave her the name of Elizaveta Alexievna, or Elizabeth the daughter of Alexius. These patronymics of the Russians have something in them antique and respectable. A common Russian might call the Empress Catharine, even when speaking to her, Ekatarina Alexievna.

According to the general rule, however, the Princess of Baden should have called herself Elizaveta Carlovna, as she was the daughter of Prince Charles; but her Imperial grandmother determined otherwise. That Sovereign had invited the Princess and her sister into Russia as fit matches for her grand-sons, the two Grand Dukes, Alexander and Constantine. Their mother, by birth Princess of Darmstadt, had already been sent thither in her youth with her sisters, one of whom had the unfortunate honour to become the first wife of Paul. This Princess, an amiable woman, and the worthy mother of a charming family, declined appearing again, with her daughters, on a stage where she herself had formerly made an unsuccessful appearance, but entrusted them to the care of the Countess Shuvalof, widow of the author of the “Epistle- to Ninon,” who was charged with the hymeneal negotiation, together with one Strekalof, as an escort.

These Princesses, after a long and toilsome journey, arrived at night, towards the end of autumn, 1792, and in terrible weather, which seemed considerably to affect them. They were made to alight at the palace in which Prince Potemkin had resided, where they were received by the Empress, accompanied by Madame Branicka, her favourite dame d’honneur. At first the young Princesses took the latter for the Empress; but the Countess Shuvalof having undeceived them, they threw themselves at her Majesty’s feet, and with tears kissed her robe and her hand, till she raised them up and embraced them: they were then left to sup at full liberty. The next day Catharine came to visit them while they were yet at their toilette, and presented them the ribband of the order of St. Catharine, together with jewels and stuffs; then displaying before them their wardrobe, looking at it, she said, “My young friends, when I arrived in Russia I was not so rich as you.”

The young Grand Dukes were introduced to them the same day. The eldest, who had already suspected the motive of their arrival, had a pensive and embarrassed air, and said nothing. Catharine told them, that, knowing the mother of these Princesses, and their country being taken from them by the French, she had sent for them to have them educated at her court. On their return from the palace, the two young Princes talked much about them; and Alexander said, that he thought the eldest very pretty. “Oh, not in the least,” cried the younger, with that brusquerie which is so natural to him, “neither of them; they should be sent to Riga, to the Princes of Courland: they are only fit for them.”

What Alexander had said, however, was reported to his grandmother, who was delighted to find that the lady she designed for him, and with whom she herself seemed enchanted, appeared handsome in his eyes. Catharine pretended that she had resembled Louisa of Baden when she arrived in Russia; and ordered the picture taken of her at that time to be brought, that she might compare it with the Princes; when, as may be supposed, every one present declared that two drops of water could not be more alike. From that moment she became singularly attached to Louisa, redoubled her tenderness towards Alexander, and engaged with more pleasure in the plan of leaving the throne to them as her immediate successors.

The young strangers made their first appearance at court on the day when the deputies of Poland were admitted to thank Catharine for the honour she had done the Republic by keeping three-fourths of it for herself. The Princesses were as much dazzled with the magnificence that surrounded them, as others were with their opening charms; but the elder met with an accident, which led the superstitious Russians to augur that she would be unfortunate in their country. As she approached the throne of Catharine, she struck her foot against the corner of one of the steps, and fell flat on the ground before the throne. Heaven, however, we hope, has averted the omen.

While the young sister spent the tedious days lamenting her absence from her country and relations, which all the pomp of the court could not efface from her mind, and was at length sent away loaded with presents, which afforded her less pleasure that the expectation of soon beholding again the banks of the Rhine, the Princess Louisa seemed to smile at the destiny that awaited her. An unknown comforter had entered her heart, and dried her tears. The sight of the young Prince, who was to be her husband, and who equalled herself in beauty of person and gentleness of mind, had inspired her with love: she submitted gracefully to every thing required of her, learned the Russian language, was instructed in the Greek religion, and was soon in a capacity of making public profession of her new faith, and receiving on her fine-turned arms, and bare delicate feet, the unctions administered by a bishop, who proclaimed her Grand Duchess, under the name of Elizabeth Alexievna.

Catharine chose rather to give her her own cognomen, than leave her that of her father, according to the usual custom. In the month of May following, the i ceremony of betrothing was performed with extraordinary pomp and entertainments. Russia had just terminated three wars, almost equally triumphant. A multitude of Generals and other Officers, covered with the laurels they had gathered in battle, augmented the number of the Court. Many Swedes, admirers of Catharine; almost all the Polish Magnats who had submitted or were devoted to her, Tartarian Khans, Envoys from Great Bukharia, Turkish Pashas, Greek and Moldavian Deputies, Sophis of Persia, with French emigrants, demanding at once, protection and vengeance, increased at this juncture the crowd of courtiers attending the august autocratrix of the North. No Court ever exhibited so brilliant and variegated a spectacle.

These were the last resplendent days that Catharine enjoyed. She dined on a throne, raised in the midst of different tables, crowned and covered with gold and diamonds; her eye carelessly wandered over the immense assembly, composed of persons of all nations, whom she seemed to behold at her feet. Surrounded by her numerous and brilliant family, a poet would have taken her for Juno seated amongst the gods of Olympus.