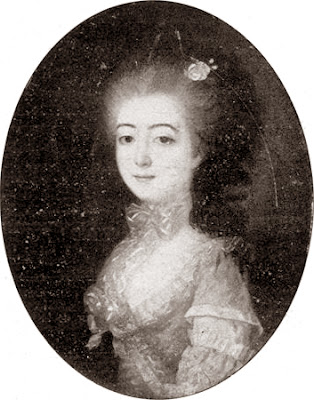 Émilie de Sainte-Amaranthe was one of the many victims of the French Revolution. Not much is known about her. We’re not even sure of who her father was. Born on 18th July 1775 in Paris, Charlotte-Rose-Émilie Davasse de Saint-Amarand was rumoured to be the child of the Vicomte de Pons, one of the many lovers her beautiful mother had. What’s sure is that the Vicomte was very fond of the little girl.

Madame De Sainte Amaranthe also gave birth to a son. Her husband was a Farmer General who loved gambling. When he lost all his money, he fled to Spain, leaving his family behind. Emilie’s mother, Jeanne, managed to make another fortune by running a fashionable salon at her house and a gambling club, “Cinquante”, attended by the wealthy and famous gentlemen of the time. Jeanne may also have worked as a courtesan at this time. 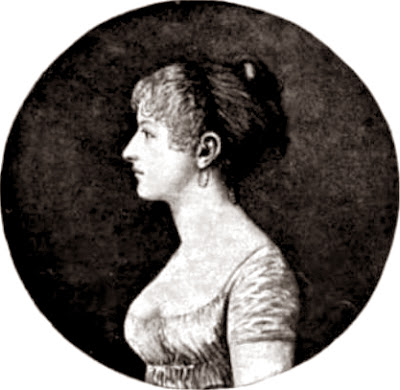 Emilie inherited her mother’s good looks. She was considered to be the most beautiful woman in France, if not of her age. Madame Amandine Roland described her thus: “Never in the course of my long career, have I met so perfect a creature. Her figure was admirable and exquisitely proportioned: she was of medium height, and her bearing and her every attitude combined gentleness and charm with grace and dignity. There was a touch of archness in her smile that made it enchanting, and when it was accompanied by a certain movement of her head one’s emotion was even greater than one’s admiration. Her taste in dress was quite exquisite.”

Emilie fell in love with François Elleviou, a famous singer. But her mother forced her to give him up. She duly did and instead married the Marquis Charles-Marie-Antoine de Sartine, who was 16 years older than her. In the spring of 1793, Emilie moved to the
château de Sucy-en-Brie, a beautiful palace purchased by her mother. But this was a dangerous time for wealthy and royalist people in France. During the Terror, Emilie, her husband, her mother and her brother were all arrested for their loyalty to the royal cause. 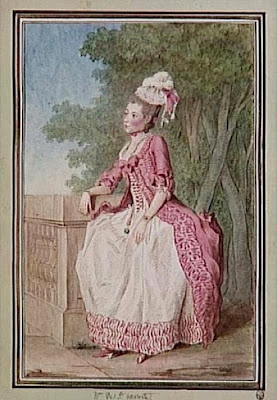 Rumours claimed that either Robespierre or Saint-Just, who had unsuccessfully courted Emilie, ordered her execution as a revenge for her rejection. However, this is probably false. In any case, Emilie and her family were imprisoned at Sainte-Pélagie. For a while, Augustin, Robespierre’s brother and a friend of the family, managed to avoid their execution. But it couldn’t last.

Eventually, the family was tried and found guilty of being part of a plot to kill Robespierre. The charges were false, but that didn’t matter. Robespierre and Foucquier-Tinville had tried to save her, but Emilie refused their help. The young girl, only nineteen years old at the time, cut her own hair, saying it was the only legacy she had to leave to her friends, and begged a guard to keep it for them. It is said that Elleviou claimed it.

On 22 Prairial (17th June) 1794, Emilie, together with 53 other people, including her family, was guillotined. Emily and her family wore red chemises, as did all those sentenced to death for murder. Emilie commented that they all looked like cardinals. The family hugged one last time before being executed. Mme. de Sainte-Amaranthe had begged the executioners to kill her before her children but this was denied her. Her son Louis was killed first, and then it was Emilie’s turn:

“Then Emilie appeared upon the platform; and when the red veil was torn from her shoulders her statuesque beauty was so transcendent that the devotees of the guillotine, who were paid to applaud, were struck dumb with admiration, and stood open-mouthed, with hands arrested. The executioners pushed her roughly upon the blood-drenched machine, and the third stroke fell.”