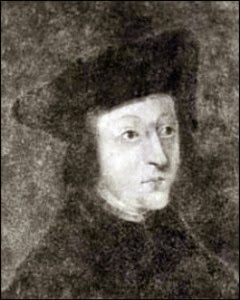 Ambassadors to foreign courts are rarely remembered, but the name Eustace Chapuys is familiar to any lover of Tudor history. A champion of Catherine of Aragon and her daughter Mary, Chapuys has left behind him lots of letters and dispatches about one of the most tumultuous periods of English history. Although often easily dismissed as biased and unreliable (and to an extent, that’s true), his reports also chronicle the events of Henry VIII’s reign and the gossips that were circulating around his court, which is why they are a wonderful resource for anyone interested in this period.

But who was Eustace Chapuys and how did he end up at the English court? The second son of notary Louis Chapuys and Guigone Dupuys, Eustace was born between 1490 and 1492 in Annecy, then in the duchy of Savoy. He studied at the university of Turin, which had an excellent law department. He remained there for 5 years, and then studied at the University of Valence, and later, at the Sapienza University of Rome. There, he became a doctor of civil and canon law, and received the Pope’s blessing.

In 1517, Chapuys was ordained and became an official of the diocese of Geneva, where he worked for the bishop and the Duke of Savoy. In 1522, he was granted the deanery of Vuillonay. Four years later, as the Duke of Bourbon’s ambassador, he was at the court of Charles V in Granada. That same year, 1526, he also made his first visit to England. The following year, the Duke of Bourbon died at the sake of Rome. Chapuys then joined the imperial service, working under Nicholas de Perrenot.

In 1529 he was back in England. His job was to advise the Queen, Catherine of Aragon, in the negotiation regarding the annulment of her marriage. Throughout her ordeal, to the very bitter end, Chapuys offered the unfortunate Queen all the support, both legal and emotional, she needed. He prepared her formal protest when she was summoned to a special court in May 1533, supported a military plan to help Catherine and, shocked just as much as she was by the eventual break with Rome, listened to the poor woman confessing she blamed what had happened on her stubborn refusal to fight for her, and her daughter’s, rights. When Catherine died, Chapuys believed she had been poisoned.

Chapuys was also a supporter of the Princess Mary. He drew up a protest against the Act of Succession, which excluded Mary from the inheriting the throne, and made plans to help her escape from England (although the Emperor vetoed those). Chapuys really cared for Mary and her well-being and she, in turn, came to rely on him during some of the most difficult years of her life. Henry has started treating his daughter very harshly, determined as he was that she too should recognize that his marriage to Catherine had been incestuous and unlawful. Mary stood firm against the bullying and threats, but Chapuys, worried about what could happen to her, convinced her to submit to her father.

It’s no wonder then that Chapuys always strongly disliked Anne Boleyn, whom he called the Concubine and, sometimes, even putain. Yet, when Anne was condemned to death for incest and treason, Chapuys was among those convinced of her innocence. The King by this time was in love with Jane Seymour, and wanted to marry her. Therefore, Anne had to go. Chapuys remained as an ambassador to England until 1539, when he was summoned to the Netherlands. But his stay there was brief and pretty soon he was back to England. That same year, he also began suffering from gout.

Chapuys was involved in the negotiations for an alliance between Henry VIII and Charles V, which lead to them declaring war on France. The ambassador then accompanied Henry’s men to France. His health continued to deteriorate and, in 1544, he asked to be relieved of his post. Instead, he was asked to help his successor, Van der Delft learn his job, and then was sent to Bourbourg, near Gravelines, for some negotiations. In July 1545, he was finally allowed to retire. That same year, he recognized Cesar as his legitimate son, but, sadly, the boy died four years later.

Chapuys spent his retirement in Louvain, where he founded a college. He also founded a grammar school at Annecy. In 1555, he decided to use his English pension to set up a scholarship for English students at Louvain. Eaustace Chapuys died on 21st January 1556. He was buried in the Chapel of Louvain College.

Further reading:
Inside the Tudor Court: Henry VIII and his Six Wives through the writings of the Spanish Ambassador Eustace Chapuys by Lauren Mackay