What would we be wearing if we were well-off women in 1818? The Empire-style dresses, with very high wastlines gathered just under the breasts and skirts falling loosely below, were still popular. While I find this style very pretty, I have to admit I don’t care much for the day and walking dresses of 1818. The ball dresses though are stunning and so are the bonnets. And aren’t those feathers an outrageously fashionable touch? Here are the dresses, let me know what you think of them in the comments! 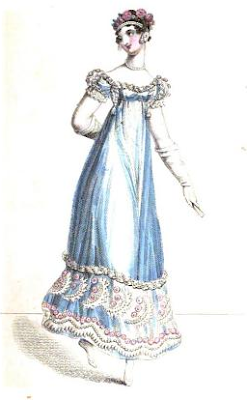 Frock of white crape, Venetian gauze, or fine net, richly embellished at the border with small double Indian roses of a beautiful pink colour, and mingled with leaves of crape and pearls: the body finished in the Oriental style, with short sleeves, which approach nearer to the elbow than formerly, and which are finished by a trimming of broad blond. The head-dress consists of a double wreath of Indian roses, interspersed with the braids of hair that are wound round the summit of the head. White satin shoes and white kid gloves. 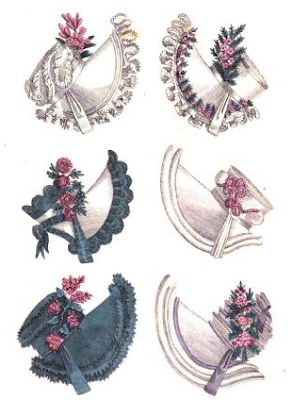 Fig 1 represents transparent bonnets of crape or net, crowned with bouquets of flowers, and trimmed at the edges with broad blond and a cordon of flowers. Fig 2 represents bonnets of satin or gros de Naples, both white and coloured, crowned with a profusion of lilacs or small double poppies. 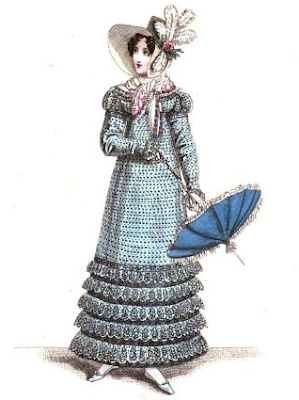 
Round dress of printed muslin, of a cerulean blue spotted with black, with bordered flounces of the same material to correspond: between each flounce a layer placed of black brocaded satin ribband. Bonnet of straw-coloured gossamer satin, ornamented on the left side with a single full blown rose, and a plume of white feathers. Cachemire santoir, and parasol of barbel blue, fringed with white. Slippers of pale blue kid, and washing leather gloves. 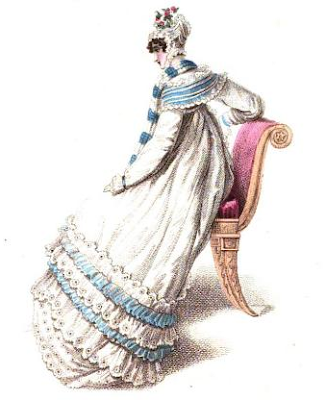 
Round dress of fine Bengal muslin, with a superbly embroidered border; the border surmounted by two flounces richly embroidered at the edges, and headed by muslin bouilloni run through with Clarence blue satin: Meinengen corsage of the same colour, with small pelerine cape, elegantly finished with narrow rouleaux of white satin and fine lace. Parisian cornette of blond, with a very full and spreading branch of full-blown roses placed in front. 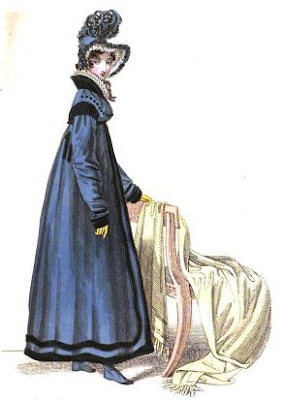 
Garter purple poplin pelisse, ornamented with black velvet: Mary Scot bonnet of garter purple reps silk, ornamented at the edge with a cordon of purple and black flowers, and surmounted by a full plume of tropic birds’ feathers variegated in black and purple. Fan corsette placed under the bonnet; and Castillian double ruff worn under the black velvet cape of the pelisse. Waterloo half-boots of garter purple and black, and lemon coloured kid gloves. 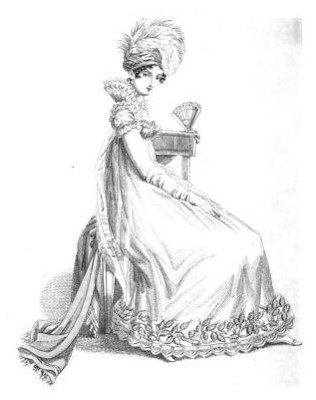 
Ceres frock, with a very broad border of wheat ears in straw, worked on tulle, and worn over a white satin slip. Toque turban of tulle, elegantly worked with straw to correspond, with Turkish foldings in front of crape and straw interspersed. Henrietta ruff of fine lace, fixed low, and terminating at the shoulders. White satin shoes, and white kid gloves. 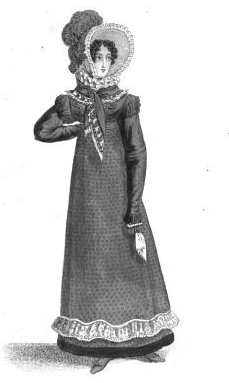 
Round dress of Bombazine, elegantly finished at the border with broad black velvet, surmounted by a flounce of fine white muslin, headed by a rouleau of the same. Black velvet spenser, with a sautoir, or half handkerchief, of mourning shawl manufacture. Bonnet of white crape, with full plume of black ostrich feathers. Bouilloné ruff of fine muslin. Black chamois slippers and gloves. 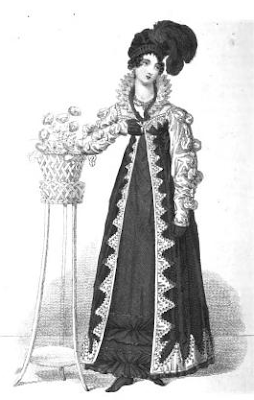 Andalusian robe of black crape, worn over a black satin slip, ornamented at the border with crape flirtings. The robe van-dyked with black velvet, richly ornamented with trimming of twisted crape, down each side. The sleeves confined at the mancheroms by a superb knot of jet. Henrietta ruff of white crape broad hemmed. Black velvet toque ornamented with jet, and black cypress feathers.