let’s continue our foray into the fashions of the year 1829, with new prints of ball, dinner and masquerade dresses: 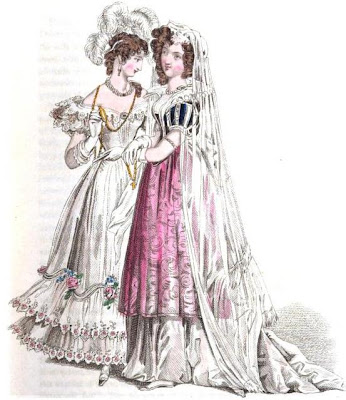 COSTUME OF THE EIGHTEENTH CENTURY

This dress is composed of transparent French tulle over a slip of rich white satin: the skirt is of a moderate length and ornamented round the edge by two full flounces of tulle, embroidered in silks in imitation of natural flowers; the upper flounce is disposed in waves beaded by pipings of white satin; at the top of each wave is placed a bunch of Provins roses and forget-me-not. The corsage is of white satin lined in front a la paysanne; it is cut a moderate height round the figure, and is richly trimmed with French blond. Head-dress: a full plume of white ostrich feathers, and rows of pearl intermingled with the hair, which is dressed in light ringlets; ear-rings and necklace of pearl, with antique cameo clasp, and brooch to match; gold chain and locket; shoes and gloves of white kid.

This elegant costume represents the dress worn in the beginning of the sixteenth century; it consists of a full train of the softest white satin, which reaches in folds to the ground. Over this is worn a short tunic of palé pink silk damask, woven in an elegant pattern of flowers. The boddice is of dark blue velvet, and fits close to the figure in the stomacher shape; the sleeves are short and very full, ornamented with bands of white satin; with this is worn a fichu of rich vandyke lace so formed that the corsage laces over it behind, while in front it is finished by tassels of pearls, and hangs as low as the waist. The necklace and armlets are of large pearls; in addition to which a rosary and cross of richly wrought gold, is suspended from the right side. Over the whole of this rich dress is worn a long veil à mantilla, of transparent gauze, bordered with silver fringe, which falls in graceful folds to the feet of the wearer, and adds greatly to the elegance of this becoming costume. 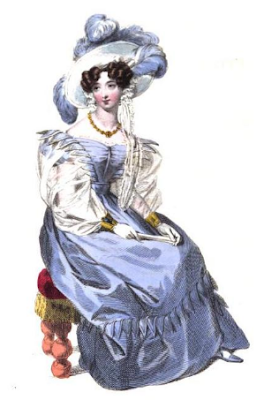 Dress of lilac gros de Naples, the corsage en draperie regulated in the centre by a perpendicular corded band, and ornamented with a trimming of Spanish points corded, meeting at the commencement in front, and widening as it extends to the shoulders, where the trimming is considerably deeper than at the waist. The back is made to correspond. Short white satin sleeves and long full ones over them of white crepe lisse, confined by broad gold bracelets, with gothic clasps at the wrist. The skirt is simply decorated by a deep Mais of the same material as the dress, headed by a row of corded Spanish points falling over it. Ceinture of pink satin, corded at the edge, and a rosette bow behind.
Spanish hat, of white gros de Naples, placed rather on the right side, ornamented with lilac ostrich feathers, one placed beneath the brim on the left side and brought over to the crown; others very tastefully disposed and falling in different directions; long loose strings of tulle, trimmed with narrow blond. Earings and necklace of emeralds, set in gold; white kid gloves; white satin shoes. 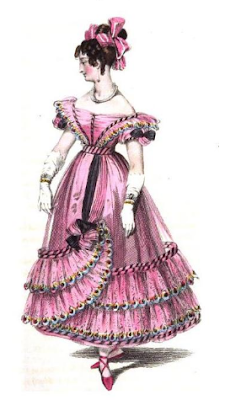 Rose colour Parisian gauze dress over a slip of the same colour; the body is longitudinally full at the upper part and plain beneath; it is very low on the shoulders and straight across the bust, a perpendicular rose colour satin rouleau, entwined with narrow black velvet, ornaments the front, and a similar cordon rises from the centre of the waist, and spreads over the shoulders at the edge of a beautiful trimming of plumes de paon, formed of feathers and spiral gauze riband. The sleeves are short and full and finished with a satin rouleau entwined with black velvet and a triple bow of black and rose colour gauze riband. The skirt is set on full, and has two flounces of the same light material as the dress, nearly a quarter of a yard in depth, ornamented en plumes de paon, headed by a double rose colour satin rouleau twined by narrow black velvet. The flounces commence about half way up the skirt and nearly in front with a rosette bow of black and rose colour gauze riband, and strings of the same attach it to the ceinture; the flounces have a very graceful effect as they turn off circularly to the left side of the dress; satin rouleau at the termination of the skirt.
Hair dressed in ringlets in front, and drawn up behind to the top of the head, where it is arranged in large bows, and interspersed with bows of silvered rose colour riband.
Pearl ear-rings and necklace, with a diamond clasp in front; bracelets en suite, and small gold ones beneath, both worn outside the gloves which are of white kid.
Rose colour satin shoes and sandals. 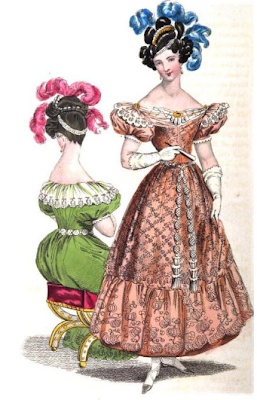 A topaz coloured satin slip finished round the bottom of the skirt with a very broad rouleau of the same material, and stiffened so as to stand out considerably. The gown is of white blond lace, the ground covered with a running pattern in leaves, disposed in lozenges. Corsage tight to the shape, cut very low and square; a piece of the same material is let in and disposed in drapery folds across the bosom; they are less full than usual, and are confined on each shoulder by a gold clasp with a diamond in the middle; a gold brooch ornamented in a similar manner, and having five diamonds pendant, fastens them in the centre of the bosom, which is marked by a rouleau of white satin. Short sleeve of blond over satin, puffed as much as usual on the shoulder, confined to the arm by a white satin rouleau, finished by a row of narrow blond, and surmounted by a fall of broad blond lace. Cordeliere of white silk richly wrought. The trimming of the skirt consists of a single flounce of broad blond lace, laid on rather full, and in such a manner that the edge forms a heading. The hair is arranged in full clusters of curls on the temples, and dressed very high behind in full bows; a gold star, with a diamond in the middle, ornaments the braid that crosses the forehead; a gold comb set with diamonds is placed in the centre of the bows in front; three long blue ostrich feathers are placed behind the bows so as to droop a little over, and two others at the left side. Diamond ear-rings; white gros de Naples sandals ; white kid gloves; cedar fan.

An under dress of light green gros de Naples, over which is a gown of tulle to correspond in colour. Corsage uni, cut square, very low behind, but rather high in front; the back broad between the shoulders, but considerably sloped at the sides and narrow at the bottom, forms the shape in a very becoming manner. Blond lace tucker a l’enfant. Short full sleeve of tulle over satin. Cordeliere of silver twist a gros grains. The bottom of the skirt is trimmed with a very broad biais, headed by a rouleau of satin and tulle, the last spotted with silver; a rich embroidery of bouquets of flowers in silver ornaments the biais. The hair is dressed full on the temples; the hind hair, drawn up to the crown of the head, is arranged in bows, except a single tress, which is plaited and brought round the back of the head and across the forehead; pink feathers, tipped with white, are disposed among the bows of hair; and a butterfly, composed of various coloured gems, ornaments the centre of the forehead. Ear-rings and bracelets, gold and sapphires; white kid gloves; white satin shoes. 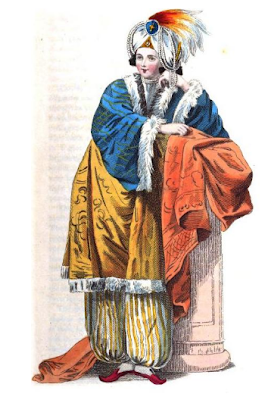 The print represents a full Turkish costume, as used on state occasions; and from its rich effect is well calculated to give variety to the Fancy Ball. The tunic is of rich yellow brocade, made very full and reaches to the knees, where it is ornamented by a trimming of white fur, laid round the hem. Under this are worn very full trowsers of white silk, striped with amber satin, and drawn round the ankle. The waistcoast is composed of celestial blue satin, striped with gold; it is very high behind, and cut low in front, to display the under-vest of fine muslin or rich lace, made full and confined round the throat by strings of pearl. The sleeves of the dress, which are very wide, are lined with yellow satin and trimmed with fur, to correspond with the tunic.
The turban is formed of numerous folds of the finest Indian muslin, divided in front by a tiara of wrought gold, ornamented by a large emerald in the centre, over which is placed an aigrette of amethysts and pearls, surmounted by a full plume of the feathers of the bird of paradise. The turban is richly ornamented by strings of Oriental pearls, disposed in various directions.
A rich cashmere shawl of a bright orange colour completes this superb dress.

What do you think of these dresses? Would you have worn them?