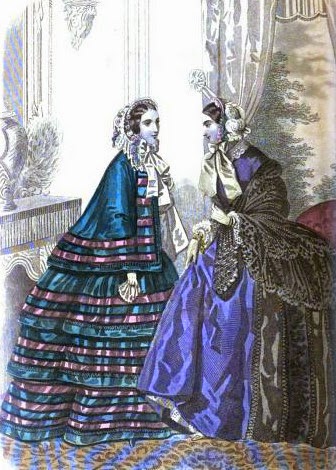 During the years I showed you a lot of fashion prints that appeared in old magazines to give you an idea of what fashionable ladies would have once worn, but they mostly were from the Regency period. So, when I came across this print of Victorian fashions, I just had the share it:

Blue glacé silk dress, with the moss fringe terminating the flounces and heading the top. Black moire antique polka, made en bretelle – the skirt of the basquine trimmed with a black lace, three quarters in depth. White bonnet, trimmed with short white feathers.

Dress of gray silk, trimmed with three flounces, ornamented with violet velvet; bretelles of the same, on the waist – which is made high, and has a deep frill round it. Undersleeves and collar of Honiton; cap composed of several rows of narrow Maltese lace, with rosettes of narrow inch wide scarlet velvet.

Do you like these outfits? Would you have worn them?