HomehistoryFashions For July, August And September 1819

today I want to show you some prints of beautiful dresses fashionable women would have worn in 1819. Unfortunately, they are all in black and white, but I hope you will enjoy them anyway. I really like this style of dress. The waist is still very high and the sleeves aren’t as huge as they will become in just a few years’ time. What do you think of them? 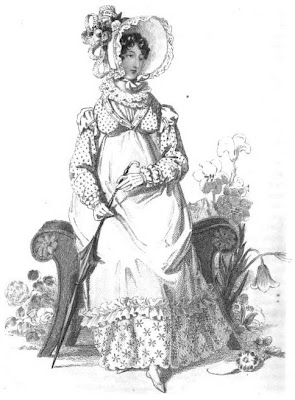 A Jaconot muslin round dress, with a chemisette body, and long sleeves made rather full, and finished at the bottom with a fulness of muslin in front of the wrist; the fulness confined across by narrow bands, which button in the middle. The bottom of the skirt is richly embroidered, and the embroidery is surmounted by a full trimming of muslin. The spenser worn with this dress is composed of primrose-coloured figured poplin: it is made in a new style; is partially high behind; the back is of a moderate breadth, and has a little fulness at the bottom of the waist: there is no collar. The spencer turns over in the pelerine style; it just meets at the bottom of the waist, and partially displays the front of the under dress: it is ornamented round the bust by a narrow band of the same material, finished with a double edging of satin, and buttoned over at rather more than a nail distance. Long sleeve, nearly tight to the arm, finished by an epaulette of white satin, divided into full puffs by bands of poplin placed lengthwise: the bottom is ornamented to correspond. Head-dress, a bonnet com Ssed of primrose-coloured satin, covered with fine clear India muslin: it is trimmed with full bows of ribbon, which are covered with white net laid on full; a bouquet of natural flowers is placed to one side; it ties under the chin. Gloves and shoes, to correspond. 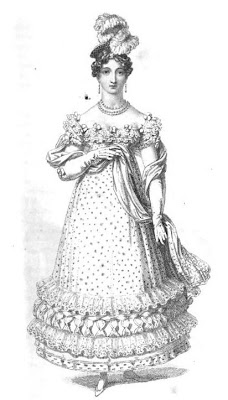 A white satin slip, over which is a round dress, composed of white gauze with small pink spots: the bottom of the skirt is finished by a band of white satin, terminated by a full flounce of blond lace; over this is a trimming of a very novel and pretty description (for which we refer to our print), and this is surmounted by a lace flounce to correspond. Frock body, cut low round the bust, which is ornamented, in a novel style, with lace and bows of ribbon; there are two falls of the latter, one of which is disposed in such a manner that, with the bows, it forms a tucker. The back is full; the sleeve short, and very full. A lace scarf is thrown round the shoulders. Headdress, a bandeau of pink satin, covered with a net-work of pearl, and finished by a pearl tassel. A superb plume of ostrich feathers is placed to one side. The hind hair is disposed in plaits, which are twisted round the top of the head, and intermixed with small bows. The front hair is curled very full on the forehead, but is much divided. Necklace and earrings, pearl. White satin shoes, and white kid gloves. 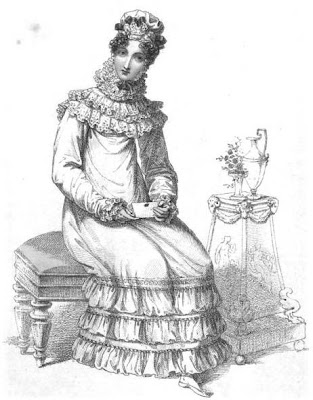 A round dress, composed of jaconot muslin; the body is plain, tight to the shape, and the waist of a moderate length; long sleeves; the skirt is ornamented at the bottom with a trimming of muslin bouillonne: there are three rows, each is finished with a cord at top, and the upper row is surmounted by a rich letting-in of work. A round pelerine is attached to the dress, which falls very low over the shoulder; it is trimmed with two rows of broad lace, which give a very elegant finish to the bust of the dress. Full lace ruff, put on so as to display the throat in front. Head-dress, a cornette of white British net; the caul is moderately high; the ears are very small; it has a full border of Mechlin lace, and is trimmed with evening primrose ribbon covered with net: it fastens under the chin by a bow to correspond. White kid shoes. Limeric gloves. 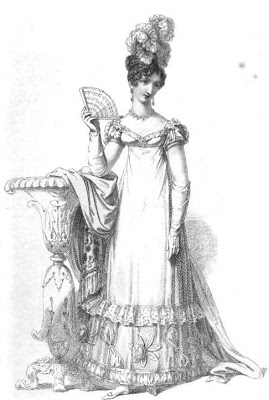 A white lace skirt over a white satin slip; the bottom of the skirt is ornamented with a fulness of white satin, confined at each edge by a narrow satin rouleau; above this is a trimming composed of satin stars; in the centre of each is a rose, and between every one a full satin leaf: this trimming is surmounted by a fall of blond. The corsage is composed of white satin; it is cut rather low, and sloping down a little in front of the bust, which is trimmed with a blond ruche. Short sleeve, of a singularly novel and pretty form, for which we refer to our print. The hair is dressed in full curls in front; the hind hair is disposed in bows intermixed with plaits. The only ornament of the head is a full plume of beautiful white ostrich feathers. Necklace and ear-rings pearl. White satin shoes. White kid gloves. Carved ivory fan. 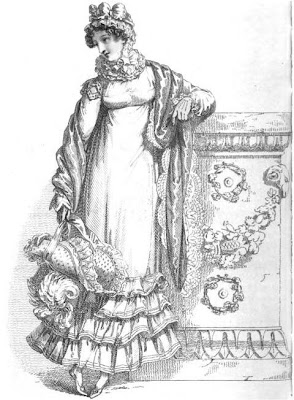 A Jaconot muslin round dress; the skirt is moderately full, and trimmed round the bottom with four flounces of the same material; these are of different widths, the bottom one is the broadest, the top the narrowest; these flounces are each finished by a double tuck, and set on full: their effect is extremely pretty. The body is high, the front is tight to the shape, the back full; a double fall of rich work goes round the throat. Long sleeves, finished with epaulettes of rich work, and trimmed at the bottom to correspond. Head-dress, a morning cornette, composed of British net, and trimmed with lace: the caul is low; it is ornamented with full puffs of net on the crown of the head; these puffs are formed by satin, and edged with lace; the border is set on full; the ears do not reach above halfway under the chin, where the cap fastens with a large bow of ribbon. The bonnet worn over this cornette, for walking, is composed of white figured gros de Naples; it is large and of a novel shape; there is a mixture of net let in on one side of the crown, in a very new and tasteful manner, and the trimming of the edge of the brim, for which we refer to our print, is at once singular and tasteful. A superb plume of feathers is placed on one side, and it ties with white ribbon under the chin. A white lace scarf, lined with rose-coloured sarsnet. White shoes. Limeric gloves. 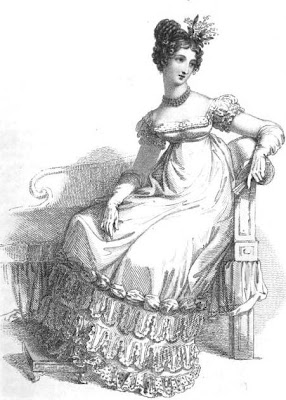 A plain white transparent gauze frock over a white satin slip; the trimming of the skirt consists of a rich fall of blond lace at the bottom, which is surmounted by two rows of the most novel and tasteful trimming we have seen for a considerable time; it is a mixture of white satin and transparent gauze; there are two rows of it: we refer for the form to our print. It is surmounted by a row of puffs en rouleaux; they are composed of white satin. The corsage is cut very low round the bust, which is finished by a double row of blond. The sleeve is short and full; it corresponds with the trimming of the skirt. The hair is dressed very full on each side of the forehead; the hind hair is brought up in a full tuft on the crown of the head: a bunch of flowers, intermingled with grass, is placed on the left side. Necklace and earrings, rubies. White satin shoes, and white kid gloves.