curious to know what fashionable and stylish ladies wore in the autumn of 1817? Then take a look at these fashion plates. Aren’t these dresses gorgeous? I love their style and colour. What about you? 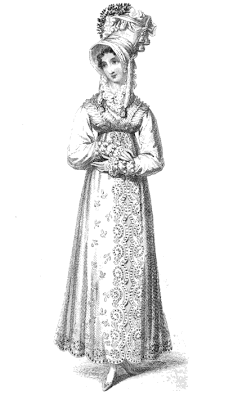 Jaconot muslin round dressover a French grey sarsnet slip. The dress is richly worked round the bottom and up the front. High body, composed of alternate strips of byas-tucked muslin and letting-in lace. Long sleeve, finished at the wrist by rouleaus of worked muslin, each rouleau edged with narrow lace. Over this dress is worn the Blandford spencer, composed of white queen’s silk. We refer our readers to our print for the form of this spencer; it is trimmed, in a very novel and tasteful style, with white satin and braiding. Fichu of white gauze, very full trimmed with tulle. Blandford bonnet, composed of Leghorn: the crown is rather high, the front of a moderate size, and square at the ears; it is lined with white satin, and trimmed with the same material and Leghorn tassels, a bunch of which is placed at the left side. A full bunch of blue fancy flowers ornaments it in front, and it is finished by white satin strings. The shape of this bonnet is peculiarly novel and becoming. Pale yellow slippers, and Limerick gloves. 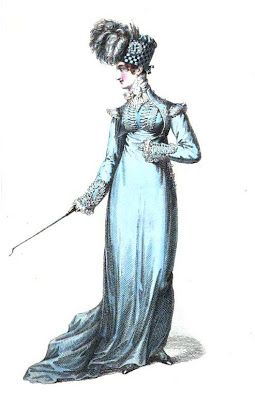 Is composed of the finest pale blue cloth, and richly ornamented with frogs and braiding to correspond. The front, which is braided ou each side, fastens under the body of the habit, which slopes down on each side in a very novel style, and in such a manner as to form the shape to considerable advantage. The epaulettes and jacket are braided to correspond with the front, as is also the bottom of the sleeve, which is braided nearly half way up the arm. Habit-shirt, composed of cambric, with a high standing collar, trimmed with lace. Cravat of soft muslin, richly worked at the ends, and tied in a full bow. Narrow lace ruffles. Head-dress, the Glengary cap, composed of blue satin, and trimmed with plaited ribbon of various shades of blue, and a superb plume of feathers. Blue kid gloves, and half-boots. 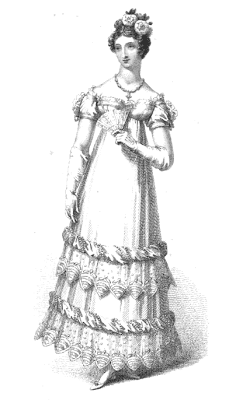 White British net dress over a soft white satin slip. The body is composed of white satin, disposed in folds, and rich letting-in lace. The sleeve, which is very short and full, is composed of the same materials: the lace is brought very full in front of the arm, and divided by tucks into full compartments, which are finished by small pearl tassels. For the form of the body, which is truly novel, we refer our fair readers to our print. The skirt is elegantly ornamented with two falls of broad rich blond, laid on almost plain; each fall is surmounted by a full rouleau of white satin, the fulness of which is confined by pearls twisted round it. The hair is turned up a la Grecque behind; it is parted in front so as to display the whole of the forehead, and disposed in light loose ringlets. Head-dress, à la Francois, a full garland of roses and fancy flowers. Necklace and earrings, topaz mixed with pearl. White satin shoes. White kid gloves, and spangled crape fan. 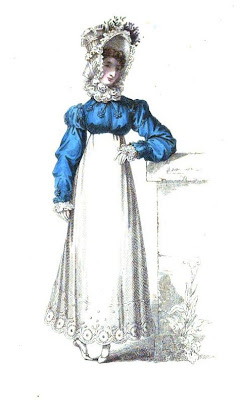 A high dress of jaconot muslin, richly embroidered round the bottom of the skirt. The body is composed entirely of work. Long sleeve, finished down the arm in front by bouillons of lace. With this dress is worn the Charlotte spencer, composed of cerulean blue satin; it is tight to the shape, the back a moderate breadth, and the waist short. The sleeve is rather wide. The trimming is extremely elegant, and it is disposed in so tasteful a manner, as to give an appearance of perfect novelty to the spencer. We are not allowed to name the materials of which it is composed. The sleeve is ornamented at the wrist, and on the shoulder to correspond. Bonnet, à la Ninon, composed of French willow. The crown is fancifully ornamented with the same material, cut in small squares, edged with white satin, and turned a little over at the ends. The front is very large; it displays the front hair, which is simply braided across the forehead: it is edged with puffed gauze, disposed in points, and confined by a narrow fold of white satin. A sprig of acacia ornaments it on the left side, and it is finished by white satin strings. French ruff and ruffles of rich lace. Blue or white kid shoes and gloves.