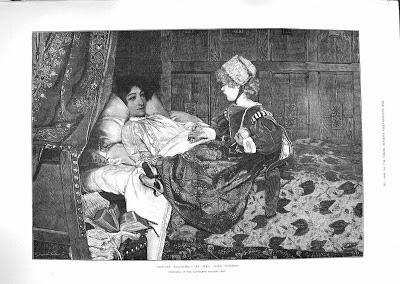 When I was little, whenever I was sick, my mum would give me chicken soup, buttered rice, and slices of banana. Even today, I rememeber these dishes fondly, and, the rare times I’m ill, I still crave them. They instantly lift my mood as I reminisce about when being ill meant staying home from school watching cartoons on TV or reading a story book. But, as a history nerd, they also got me wondering, what were sick people given to eat in the nineteenth century? What diet were they recommended to follow? The Young Lady’s Friend shares a few examples:

First in importance comes water gruel, which a writer on health calls “the king of spoon-meats” and the ” the queen of soups,” saying, “it gratifies nature beyond all others.” Dr. Franklin’s favourite breakfast was a bowl of warm gruel, in which there was a small piece of butter, and some toasted bread and nutmeg. This, though the simplest of all preparations, is often ill made, and therefore I recommend every woman to make a point of learning to do it in the best manner. To make good gruel, the oatmeal must be well sifted; it must be well mixed, so as to be free from lumps, and then it must be well boiled. Oatmeal or grits may be used in making gruel; the latter are generally preferred; but in this, as well as whether it should be thick or thin, and whether sweetened or otherwise flavoured, the patient himself may generally be consulted. Care, however, must, of course, at all times be taken, never to indulge the patient by introducing into his gruel, or other food or refreshment, anything which the doctor has prohibited in another form. In old times, no one ever thought of making gruel, without seasoning it with wine, and sugar, and nutmeg; but now that such condiments are prohibited, it is more than ever important to know how to prepare plain watergruel in the best way. Where milk is not forbidden, a small tea-cupful added to a pint of gruel, after it is made, and boiled up once in it, is a great improvement. Some invalids are better pleased with gruel served up in a tumbler, set on a small plate, with a tea-spoon beside it, than when presented in a bowl with a large spoon. But this is a matter of fancy.

This is made nearly in the same way as gruel, only using flour instead of meal, and half milk instead of water. The whole cooking of the flour should be done with water, and the milk added afterwards and boiled up once.

Take a piece of lean but juicy beef, wash it nicely, and cut it up into pieces about an inch square; put these into a wide-mouthed bottle, and cork it up closely; then set the bottle into a pan of water, and boil it for an hour, or more if you have time. In this way you will get a pure juice of the meat, undiluted with any water, and a small quantity will answer the purpose of nourishment.

When a sick person is tired of slops, pearl sago, boiled in water till it cools to a jelly, may be used. It may be eaten with powdered loaf-sugar and a little cream.

A tumbler-full of this may be made in two minutes, if you have boiling water at hand. Take a small basin, and put in it a tea-spoonful of the powdered arrowroot, moisten it with a table-spoonful of cold water, rub it smooth, add another of warm water, and stir it till it is perfectly free from grains ; then pour on boiling water, stirring it all the time, till it changes from a thick to a transparent substance; a little lemon-juice and sugar make this a delicious draught of thickened lemonade. When prepared in the basin, pour it into a tumbler, without spilling a drop on the outside, and put it on a little plate and serve it. Arrowroot prepared with milk instead of water is more substantial food, and must be seasoned with salt. It may be made as thick as blanc-mange, and eaten cold with cream and sugar.

Put a set of calves’ feet, nicely cleaned and washed, into four quarts of water, and reduce it by boiling to one quart; strain it, and set it by to cool. When cold, scrape off all the fat, cut it out of the bowl, avoiding the settlings at the bottom, and put to it a quart of new milk, with sugar to taste, and boil it a few minutes. If you wish to flavour it with cinnamon or lemon-peel, do it before boiling ; if with rose-water, or peach-water, do it after. When boiled ten minutes, strain it through a fine sieve into a pitcher, and stir it till it cools. When only blood-warm, put it into moulds that have just been wetted in cold water, and let it harden. This is a good dish for the sick or healthy.

What foods do you crave when you’re ill?