I was just browsing the 1816 edition of the Repository of Arts, Literature and Fashion, when I came across these images of two very peculiar garden seats. The first one reminds me of a merry-go-round while the second design resembles a circus tent. I think they are very whimsical and fun, although I’m not sure I would want them in my garden… 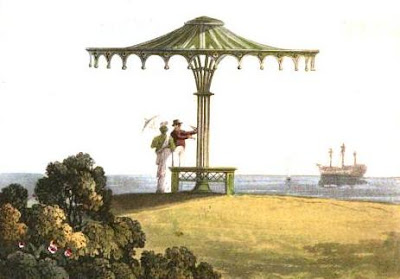 The form of [this] design is in imitation of those buildings in India that were frequently erected for monumental or devotional purposes, and nearly resemble an umbrella: the stem and beams of it are intended to be made of light work in iron, and the roof filled in with copper sheeting. The stem being fastened firmly into the ground, the wind would have very little effect upon it, particularly as it would possess a certain degree of flexibility; and with very little trouble the whole might be removed from one spot to another, and there fixed as in the first instance. 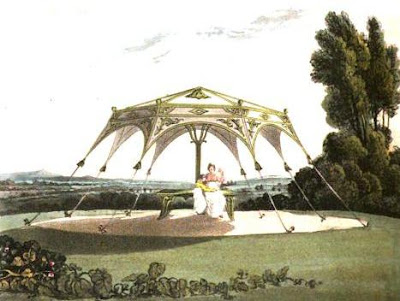 [This] design is of the marquee character, and the covering is supposed to be of such cloth as is generally used for them, the devices being either woven in the cloth itself, or painted upon it. This is supported upon an iron framing, and from which it is farther extended by cords. By preparing sockets in several parts of the grounds, so fitted to the stem or the upright as to receive it, the whole might be removed and fixed in a few minutes; and in winter it could be put away, as the ribs of the top might be prepared to fold into a small compass, and the covering packed up as is usual with officers’ tents.

What do you think of these garden seats? Do you love them? Hate them?