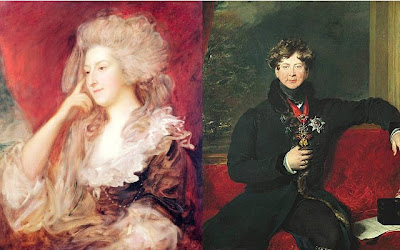 George, Prince of Wales (the future George IV, also nicknamed Prinny) loved women. He had a tendency to fall in love easily and had affairs with numerous ladies. But the only woman he really loved was Mrs Maria Fitzherbert. Six years older than George, Maria was a pretty woman with a nice figure and beautiful complexion, who had already been widowed twice. When her second husband died, she moved to London where she entered its society and one day, while at the opera, she was introduced to the Prince of Wales. George was instantly smitten with her and Maria, though flattered by his attentions, wasn’t interested in becoming a royal mistress and kept him at arms’ length for months. 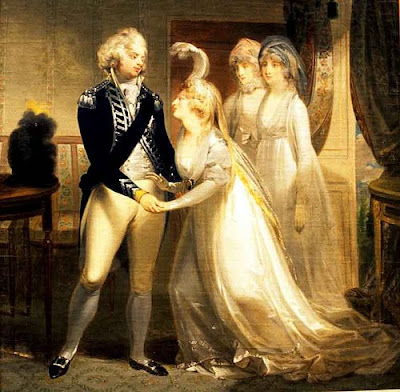 Undeterred, the Prince decided to employ more drastic measures. In 1784, Maria received a visit from the royal physician and two messengers. They told Maria the Prince had stabbed himself and that his dying wish was to see her. Maria agreed to go but only if Georgiana, Duchess of Devonshire, agreed to come with her. Georgiana was having a party when she was called away but, feeling she really had no choice, she agreed to go with them, leaving her sister Harriet in charge at Devonshire House. It was dark when they arrived at Carlton House, the residence of the Prince of Wales.

Here, the two women found Prinny sprawled across the sofa and covered in blood, crying and breathing with difficulty. Moved at the scene, Maria agreed to marry him. All that was needed to seal the pact now was a ring which Georgiana reluctantly provided. Now, Prinny fell back on the sofa and seemed to rest more easily. The two women returned home. In the morning, Maria fled the country and went to France. It wasn’t just the realization the stunt was probably staged that made her pack her bags, she also knew their marriage wasn’t valid for the law. 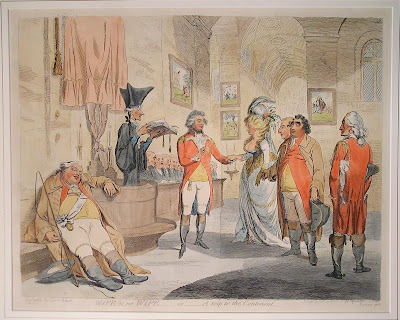 The Royal Marriages Act, a law passed by George’s father, stated that members of the Royal Family couldn’t marry without the King’s consent. In addition, Maria was a Catholic and the English law banned those in the line of succession to the throne from marrying a Catholic. But in this case the saying “out of sight, out of mind” didn’t prove true for Prinny. He was still in love with Maria, who, tired of spending time on the continent, returned to London in November 1785. She now agreed to marry him properly. On 15th December 1785, in her London home, the couple was married by Mr Bart, an Anglican priest. It was rumoured that he agreed to celebrate the wedding because the Prince had promised to pay his debts or even bail him out of prison.

The Devonshires had been invited to the wedding but thought best not to go. Instead, the bride’s brother Jack Smythe and uncle Henry Errington served as witnesses. Although the marriage was null and void by English law, both the Catholic and Anglican Churches considered it legal and, for the rest of her life, Maria considered herself George’s true wife. After living together (but not openly) for several years, the Prince, who had extravagant tastes and spent lavishly, was forced by the government to marry Princess Caroline of Brunswick and beget an hair in exchange for his debts being paid off. The marriage was a disaster though and Prinny continued to see Maria. When he died he wore a miniature of her. He was buried with it.