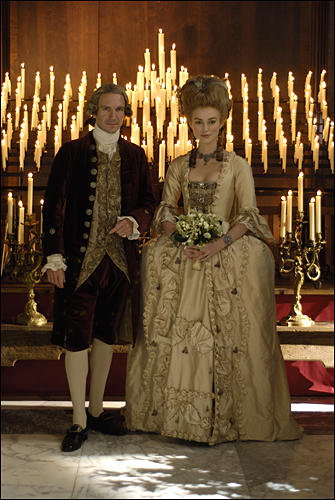 News that the Duke of Devonshire, one of the wealthiest bachelors in England, was to marry the beautiful and charming Georgiana Spencer spread fast and created quite a sensation. The wedding was very publicized and, fearing the church would be crowded with curious onlookers, the bride’s parents decided to keep the ceremony secret. So secret that even Georgiana didn’t know about it until the very morning of her wedding day. But she didn’t mind. She liked the idea of a secret wedding and, moreover, fancying herself in love with the Duke, she couldn’t wait to marry him.

So, on the morning of the 7th June 1774, the 17 year old bride and the 26 year old bridegroom, together with the only five guests invited – Lord Richard Cavendish, the Duke’s brother, Dorothy, Duchess of Portland, their sister, Lord and Lady Spencer, and Lady Cowper, Georgiana’s grandmother – made their way to Wimbledon Park. In the parish church there, the ceremony was conducted. The bride wore a white and gold dress (of which we sadly have no pictures) and silver sleepers. Her hair was adorned with pearl drops. Her emotions could be seen on her face, while the Duke remained inscrutable as always.

Unfortunately, the marriage was unhappy. Georgiana was too naive to realise that the Duke was as cold on the inside as he was on the outside and his infidelities certainly didn’t help. Just shortly before their wedding, his mistress Charlotte Spencer, a milliner who wasn’t related to his bride, had given birth to their baby daughter Charlotte. Here’s how Mary Granville, a friend of the Spencers, recalled the event:

“The great wedding is over, and at last a surprise, for this was the expected day; but they managed very cleverly, as they were all at the birthday, and the Duke and Duchess danced at the ball. It was as great a secret to Lady Georgiana as to the world. Sunday morning she was told was her doom; she went to Wimbledon early, and they were married at Wimbledon Church, between church and church, as quiet and uncrowded as if John and Joan had tied the Gordian knot. Don’t think that because I have made use of the word “doom” that it was a melancholy sentence to the young lady, for she is so peculiarly happy as to think his Grace very agreeable. The duke’s intimate friends say he has sense and does not want merit. To be sure the jewel has not been well polished. Had he fallen under the tuition of the late Lord Chesterfield he might have possessed les graces; but at present only that of his dukedom belongs to him. Nobody was at the wedding but the Duchess of Portland and Lady Cowper as fine and gay as the bride herself.”