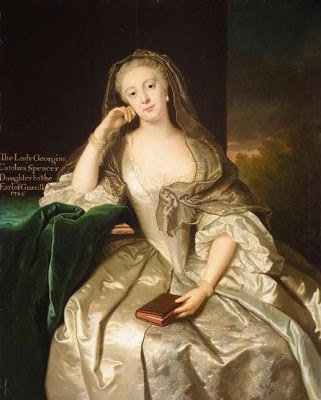 When Georgiana Spencer married William, Duke of Devonshire, she thought they were gonna live happily ever after. She knew that aristocratic marriages were arranged to forge alliances and increase the prestige and wealth of both families, of course, but there had been enough happy marriages in her life for her to believe the same could happen to her. Her parents had been very much in love with each when they got married, with Lady Spencer declaring, many years later, that she had never regretted her choice.

Neither did Georgiana’s paternal grandmother, Georgina Carteret. Born on 12 Mar 1715, Georgina was the third child of John Carteret, 2nd Earl Granville, and his first wife Frances Worsley. She got married, on Valentine’s Day 1734, to John Spencer, a man who had picked her off a list of potential brides his grandmother, the formidable Sarah Duchess of Marlborough, had compiled. The Duchess had wrote down the names in alphabetical order, and John, not really caring about any of the women on it, simply picked the first name on it.

Such carelessness in the choice of a bride would usually result in a miserable union. It certainly didn’t help that John was very fond of gambling, drinking, and had no intention of giving up other women. It would have been enough to drive the charming and smart Georgina to despair. But the young bride was also patient and madly in love with her husband, so she decided to turn a blind eye to his indiscretions and faults. The couple had one son, John, Georgiana’s father, and a daughter, Diana, who died aged 8.

Such an irregular and debauched lifestyle was bound to take its toll on John. Actually, it killed him off prematurely. John Jr was only 11 when his father died in 1746. Georgina, though, didn’t mourn John too long. Four years later, she married again, this time to William, Earl Cowper. It was the second marriage for him too. Georgina lived a long life and managed to see her granddaughter Georgiana get married. But rather than a source of joy, the marriage concerned her because it had made the young bride become a lot quieter than usual. There was nothing she could do about it though. Georgina died of cancer shortly afterwards. She was 64 years old.

Further reading:
The Duchess Of Devonshire’s Gossip Guide To The 18th Century