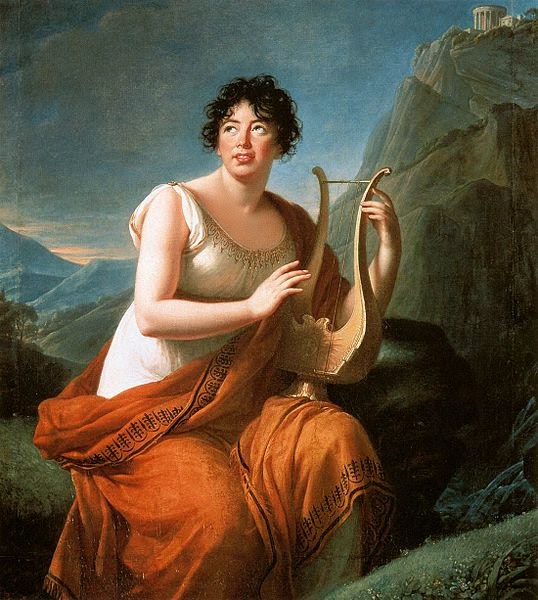 Like many liberal French aristocrats, Germaine De Stael had greeted the revolution enthusiastically, believing it would bring freedom and much-needed reforms to the country. Pretty soon though, as the revolutionaries grew more and more violent and the hatred against the aristocrats increased, she became disillusioned with it. And, on 2 September 1792, the day the prison massacres started, Germaine finally decided to escape to Switzerland. But things didn’t go exactly according to plan.

Germaine made the mistake of choosing to travel in her big sumptuous yellow coach, which was harnessed with six horses. Such luxury was never gonna pass unnoticed. Germaine knew it, but she naively believed that her boldness would serve as a disguise for her true intentions. In other words, she thought that by making her escape so obvious, people would think that she wasn’t escaping at all. Who would be so stupid to make her intentions so blatantly obvious, after all?

It wasn’t really a well-thought-out plan, and it, obviously, backfired. The horses had barely started moving when a group of old women threw themselves in front of them, and accused Germaine of escaping abroad with the gold of the nation to join the enemies of France. Their shouts attracted a larger crowd and soon Madame De Stael, who was heavily pregnant, was taken to the ward office of the fabourg Saint-Germain. Upon examining her documents, the ward officials found them in disorder. A servant was missing.

Madame de Stael realised that she wouldn’t be allowed to travel further and dispatched a groom to inform a friend whom she was supposed to pick up along the way, that she couldn’t make it. Then, the police escorted her to the Hotel de Ville. The Hotel de Ville was only half an hour away by foot, and yet, the coach, due to the narrowness of the streets and the throngs of people lining them, took three hours to reach it. All the time people screamed abuse at Germaine. Madame de Stael appealed for protection to the policemen, who, however, were as menacing and cruel as the populace.

Only the policeman who sat beside her in the coach was moved to compassion and promised Germaine he would protect her with his life. He kept his word when, after the party arrived at their destination, a man pointed his pike at her. The policeman stepped in with his words, and Madame de Stael was allowed to pass safely. While she was waiting in the town hall, she was noticed by Louis-Pierre Manuel, a member of the provisional municipality of Paris who had agreed just a few days previously to free some of her friends from prison.

Manuel, fearing Germaine would be hurt, locked her, together with her maid who had accompanied her mistress, in his office, where they remained for six hours, without food nor water. Only when night fell, and the assassins made their way home from the prisons where they had slaughtered so many innocent victims, did Manuel return to free Germaine and her maid. He then drove them home in her own carriage, which had remained untouched thanks to the efforts of a National Guardsman, and promised her that, the next day, he would send her a new passport.

He kept his word. The new document was delivered the next morning by Jean-Lambert Tallien, who also took her to the city gates. From there, the carriage continued its journey south and, from there, reached Switzerland safely.

Further reading:
Liberty: The Lives and Times of Six Women in Revolutionary France by Lucy Moore