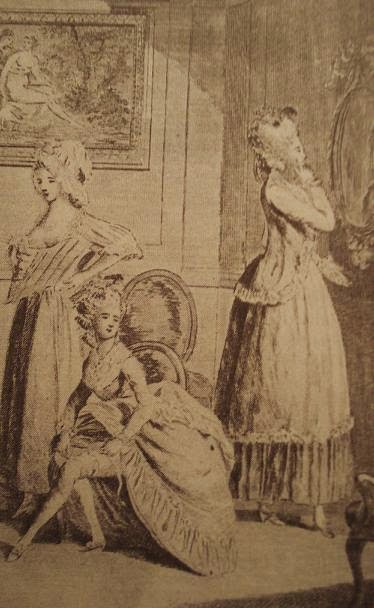 Gertrude Mahon, known as the Bird of Paradise, was one of the most infamous prostitutes of the 18th century. Born in 1752, she was the daughter of the Countess of Kerry and her second husband James Tilson, a diplomat. Tilson, who loved the high life, squandered all their money to keep up with the Joneses. Gertrude therefore grew up in the heap of luxury, which the family could hardly afford, surrounded by the many pet birds and two lap dogs that ran free around their house.

A tiny beauty (she was about 4 feet 1 inch tall) with black hair and dark eyes, she had many suitors. Of course the one who captured her heart was totally unsuitable. Mr. Gilbreath Mahon was her singing master. Knowing her family would never approve, Gertrude agreed to elope with him in the middle of the night. The couple made it as far as Dover before the men Lady Kerry sent after them found them.

Gertrude, claiming to be exhausted, asked them if she could take a nap before returning home. The men, naively, agreed. Mahon, pretending defeat, asked the men to join him while he drowned his sorrows with a few drinks. Again, the men agreed. Soon, they were drunk. Gertrude was now able to leave her room and rush to her ship. Soon, Mahon follower her. The two reached Calais safely.

Gertrude was forgiven by her family. Mahon wasn’t. Her family refused to have anything to do with him. At first, the happy couple didn’t care, but after their first child, a son, was born, problems started. Mahon ran away with another young woman, leaving Gertrude alone. She didn’t care. Her mother would support her. But the following year, Lady Kerry died too.

Her half-brother, Earl Kerry, refused to help Gertrude in any way. She was now totally alone, destitute, and without protection. Like too many unfortunate women before her, she turned to prostitution. Her new job earned her both money, fame, and influential friends. Dressed in colourful gowns ornamented with feathers, which gained her the nickname “Bird Of Paradise”, she attended masquerades and other hot social events, where she met and became friends with her rival courtesans, Mary “Perdita” Robinson, Grace “Dally the Tall” Elliott, and Elizabeth Armistead.

She had many lovers, but with her husband still living and enjoying himself in Jamaica, none of them could ever make an honest woman out of her, even if they had wanted to. One of them was obviously very dear to Gertrude as she agreed to follow him to Negwate prison when he was arrested for their debts. But she got out every now and then to attend masquerades and other social events. Eventually, she had to flew the country and go to Dublin to escape her creditors. Here, she took to the stage, with moderate success. She was never a great actress.

When she returned to London, she slowly fell into oblivion. The papers and the public had loved Gertrude when she was young and gay. But once her beauty started to fade, no one cared for her anymore. She occasionally appeared in a play, but died, no one knows exactly when, in obscurity.