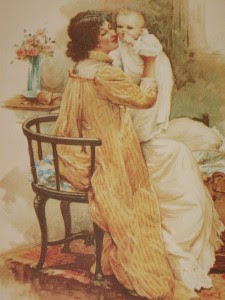 Giving birth in the nineteenth century was a harrowing and painful experience. Women would just give birth at home, assisted only by a midwife or more commonly at this time by a physician. There were no hospitals, no drugs to ease the pain and the risk of dying was very high. Now imagine going through this while travelling on a coach or ship. Scary, isn’t it? Well, that’s what happened to two women in 1818. The birth of their children was announced in the Belle Assemblée magazine as follows:

Lately, a woman, who had taken her place to Newcastle, was delivered of a child on the Telegraph coach, just at the entrance Harrowgate. The coach was fortunately only about one hundred yards from a cottage, where the child, a fine boy, was taken in an apron. We are glad to state that both the mother and child are doing very well, in more senses of the word than one; as the ladies at Harrowgate have liberally supplied the poor woman with clothes, and a collection has been made for her to the amount of about 30l.

Lately, a woman, passenger in the Marin, Peebles, from Liverpool to Glasgow, was safely delivered of a fine female child. The child is named Maria Peebles; but as she was born at an equidistant point from Scotland, England, and Ireland, a difficulty will occur to say to country she may belong.

It must have been a scary and worrying experience for these women but thank goodness everything seems to have gone well!