The 1816 edition of the Belle Assemblee featured a very interesting article about the headdresses of some of most famous women in ancient Rome, and how hair fashions changed throughout the centuries. Here it is:

FAUSTINA, WIFE OF THE EMPEROR ANTONINUS
She knew how to arrange her hair in the most elegant manner, without any high toupet, and without even the ornament of an aigrette. A very narrow bandeau divided her hair in front from that behind, where it was tied underneath, the bow negligently appearing towards the uncovered ear; and two little bows of rib band fell on the nape of the neck behind. The front hair waved seemingly without art, and four braids of very long hair was wound in a kind of serpentine wreath all over her head, all equally divided, without touching each other; neither the roots or ends could be discovered, and seems plainly to shew that she was indebted to art for this ornament. If the reports of Claudieu may be credited, it was customary to shave the heads of every prisoner taken in battle, who was of distinguished birth, as a symbol of his loss of liberty; and Sidonius asserts, that this hair was scut to Home, to be fabricated into head-dresses for women of quality.

THE YOUNGER FAUSTINA
From the forehead of this Faustina there is half a foot to height of curls built up, consisting of five or six rows, dressed very forward, and forming a most curious contrast to the headdress described above: the locks behind are woven together with much art, and consist of so great a number of plaits that it confirms the preceding idea, of the quantity of false hair which must be requisite to form this head-dress; for it is not possible that such an edifice, and formed of such innumerable braids, could be of the hair belonging to this Princess: a long needle or bodkin, of the kind we have before described, fastens this tissue of tresses, and prevents their being discomposed.

JULIA, DAUGHTER OF AUGUSTUS
She was said to be the most beautiful lady in the Roman empire; and if, as it is said, that she delighted in being negligent in her attire, she could not but be sensible that a well studied dress was of infinite advantage to her attractions. We find her represented with a veil gathered up, the careless folds of which cover the top of her head. A large curl of hair is seen bordering this veil horizontally,and surrounding her head; a row of hair turned up, quite plain, is in the place of the toupet, and the hair on the temples seem only to be abandoned to their natural wave. The ear is bare, and the ends of the hair form’ a curl in the nape of the neck, which makes half a circle from one ear to the other; a narrow ribband, or perhaps the embroidered border, crosses the veil in the middle: at the extremity of this veil, which is at the very back part of the head, a large tuft of hair, which seems to have caused much care and pains in the dressing, rises proudly in numerous large curls, and can be compared to nothing but the tail of an ostrich, or a very large powder pun”; but all the ends of the hair are concealed in four rows of curls. The two ends of the toupet are not elevated, but are flattened as much as possible, with pomatum on each side, from whence they are carefully directed towards the middle, where the ends are collected under a tuft of hair, which is raised without being artificially bent backward from the forehead, and which seems to take its course towards the veil. 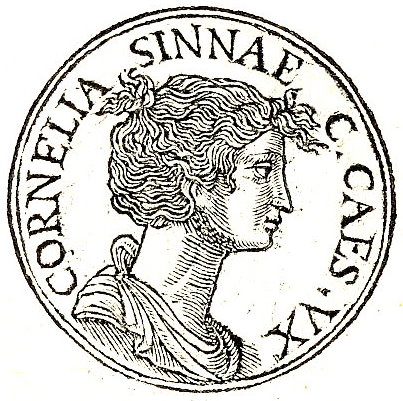 CORNELIA, WIFE OF JULIUS CESAR
Her hair was always dressed in the most simple style, and only twisted a little next the face; her tresses drawn together on the summit of her head, resembled a Turkish turban, and formed a curl without any art. The calamistrum, or curling iron, was then unknown; and indeed, at that time any artificial curling was regarded as indecorous, and the hair simply combed was more accordant to the rules of modesty. But simple as this Roman head-dress may appear to our modern belles, they must, however, agree in acknowledging their obligations to the ladies of ancient Rome, who were pleased to occupy themselves in modulating and improving the different species of headdresses, and in applying themselves unceasingly to give them a new and more elegant form, and to banish as much as possible, the odious uniformity of one particular fashion.

Julia, and the two Faustinas, carried the study of fashion to a very high degree of perfection, considering the age in which they lived: but chiefly Sabina Poppea, that celebrated wife of Nero, employed herself in an excessive degree on the adorning her head, and distinguished herself in a particular manner above every other princess in the manner of dressing her hair. One day, when her glass told her that her head-dress did not become her, she wished fervently to die sooner than look old or ugly from want of taste in her dress. Her rage for dress was so much her ruling passion, that she beat her milliners most cruelly, or her waiting maids, whenever, by an unfortunate stroke of the comb, they had spoilt the turn of a curl of hair.

OCTAVIA, THE SISTER OF AUGUSTUS
All her adorning consisted in the disposal of a fine head of hair, and she was more studious of arranging it well than Cornelia. On the head of that lady, we can scarce perceive the narrow ribbon with which she tied her locks to form the species of turban that composed her head-dress. The hair of Octavia was bound round with a ribbon, while a few locks strayed carelessly over her forehead, and the hair behind was tied up in a chignon in a double bow forming a kind of cross. Such is still the head-dress of the Italian female peasantry, and the youthful maiden without the aid of foreign ornament, fears not to discompose her head-dress, as she dances gaily and meets the rage of the stormy wind, without trembling for her many formal curls artfully arranged, and which take up so much time at the toilet of the town-bred lady.

CLAUDIA, DAUGHTER OF CLAUDIUS
She always regarded a fine head of hair as the greatest outward ornament a female can boast. The hair of Claudia was drawn together at the back part of the summit of the head, but without forming any bow, chignon, or curl. A long plait from three tresses was carried round her head to the roots of the hair behind, which were entirely concealed, as well as her ears; above the left ear hug negligently, and without any appearance of art, a light tuft of hair.

Which hairdo is your favourite?