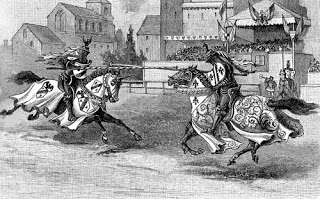 On 10 March the king, having a new armor made to his own design and fashion, such as no armorer before that time had seen, though to test the same at the tilt, and ordered a joust for the purpose. The lord marquis of Dorset and the earl of Dorset and the earl of Surrey were appointed to be on foot: the king came to one end of the tilt and the duke of Suffolk to the other. Then a gentleman said to the duke: ‘Sir the king is come to the end of the tilt.’ ‘I see him not,’ said the duke, ‘by my faith, for my headpiece blocks my sight.’ With these words, God knows by what chance, the king had his spear delivered to him by the lord Marquis, the visor of his headpiece being up and not down or fastened, so that his face as quite naked. The gentleman said to the duke: ‘Sir the king is coming.’

Then the duke set forward and charged with his spear, and the king likewise unadvisedly set off towards the duke. The people, seeing the king’s face bare, cried hold, hold; the duke neither saw nor heard, and whether the king remembered his visor was up or not few could tell. Alas, what sorrow was it to the people when they saw the splinters of duke’s spear strike the king’s headpiece. For most certainly the duke struck the king on the brow right under the guard of the headpiece on the very skull cap or basinet piece to which the barbette is hinged for strength and safety, which skull cap or basinet no armorer takes heed of, for it is always covered by the visor, barbette and volant piece, and thus that piece is so protected that it takes no weight. But when the spear landed on that place there was great danger of death since the face was bare, for the duke’s spear broke into splinters and pushed the king’s visor or barbette so far back with the counter blow that all the King’s head piece was full of splinters. The armorers were much blamed for this, and so was the lord marquise for delivering the spear blow when his face was open, but the king said that no one was to blame but himself, for he intended to have saved himself and his sight.

The duke immediately disarmed and came to the king, showing him the closeness of his sight, and he swore that he would never run against the king again. But if the king had been even a little hurt, his servants would have put the duke in jeopardy. Then the king called his armorers and put all his pieces of armor together and then took a spear and ran six courses very well, by which all men could see that he had taken no hurt, which was a great joy and comfort to all his subjects present.