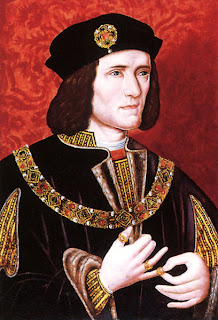 Following the news that Richard III’s remains may have been found, author Gareth Russell wonders what kind of funeral he should be given. And why he believes “things like historical apologies, historical compensation and grand gestures of historical rehabilitation” aren’t right. To quote:

However, I am very uneasy with things like historical apologies, historical compensation and grand gestures of historical rehabilitation. I think it cheapens History and feeds the arrogance of Modernity. For instance – a few years ago, there was a very well-meaning campaign, led by a decorated veteran from the Battle of Britain, to have Anne Boleyn posthumously pardoned and then removed from her grave in the Tower of London so that she could be reburied in Westminster Abbey. The campaign even attracted the attention of the Home Secretary and the Archbishop of Canterbury. But, ultimately, it failed. And it should have. Anne Boleyn still lies in the cold stone of the Tower of London’s chapel and she is still, officially at least, a convicted traitor to her country and an adulteress.

There is far more reason to believe that Anne Boleyn was the victim of a truly horrifying miscarriage of justice than there is to suppose that Richard III wasn’t guilty of at least some of the crimes he was accused of, but that doesn’t mean that pardoning her and re-burying her would be right. If we stand up in 2012 and say “Oh, that was awful, let’s make it better,” then we are guilty of breathtaking arrogance in assuming that our actions can ameliorate past horrors. History should be left alone, so that it can stand and remind us of the horrors of the past – and of man’s inhumanity to man. We must never assume that a couple of glib words and a few pretty ceremonies can erase that. Anne Boleyn should be left where she is, because reburying her in Westminster Abbey would only serve our emotions – not hers or anyone who knew her. It is far more poignant to stand in Saint Peter-ad-Vincula’s today and to see the tiny little spot of earth where she was dumped back in 1536 and to reflect on a terrible time in our history, when women (no matter how gifted or exalted) were the property of their menfolk and could be disposed of as such. If we moved her into Westminster Abbey, we could stand there and comfort ourselves by thinking – “Isn’t it nice, though, that in the end she ended up here?” And we should never, ever, try to give the past a happy ending to suit our own sentimentality. We should remember what really happened and understand that, in History, there is no retraction. There can be no mea culpa big enough to take back what has been done. If you believe Richard III was framed by the Tudors, this state funeral will amount to nothing more than an attempt to put a Disney-like gloss on his story. It would give him a happily ever after that detracts from the truth of his actual story.