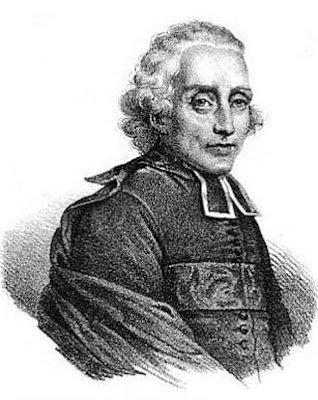 At the outbreak of the Revolution, the Archbishop of Paris, Monsignor Antoine Le Clerc, de Juigné nominated him as confessor to Madame Elizabeth, the sister of Louis XVI and he visited her frequently in prison. His mother and sister joined him in Paris, his mother eventually dying in captivity while his sister died later. The Archbishop gave the Abbé Henri Essex Edgeworth de Firmont the title Grand Vicaire, with responsibility for all the Catholics of Paris, and fled for is own life to Germany. An aunt in Galway asked him to flee and be her chaplain, as she had also become Catholic, but he used as an excuse that his English had become poor after many years abroad. A letter to a priest in London told the truth:

Almighty God has baffled my measures, and ties me to this land of horrors by chains I have not the liberty to shake off. The case is this: the wretched master [the King] charges me not to quit this country, as I am the priest whom he intends to prepare him for death. And should the iniquity of the nation commit this last act of cruelty, I must also prepare myself for death, as I am convinced the popular rage will not allow me to survive an hour after the tragic scene; but I am resigned. Could my life save him I would willingly lay it down, and I should not die in vain.

The evening before January 21, 1793, the Abbé fell in tears at the King’s feet. Louis helped him up, made his last confession and then bade farewell to the Queen and their children. The Commune having reluctantly allowed the Abbé to put on vestments, as clerical dress had been forbidden, he said Mass and gave the King his last Communion. The two stayed together until dawn:

The King, finding himself seated in the carriage, where he could neither speak to me nor be spoken to without witness, kept a profound silence. I presented him with my breviary, the only book I had with me, and he seemed to accept it with pleasure: he appeared anxious that I should point out to him the psalms that were most suited to his situation, and he recited them attentively with me. The gendarmes, without speaking, seemed astonished and confounded at the tranquil piety of their monarch, to whom they doubtless never had before approached so near….

In one of his last gestures, the King placed his hand on Edgeworth’s knee and then told the guard to take care of his priest. Louis appeared shocked when the guards began to bind his hands. Edgeworth told him: “Suffer this outrage, as a last resemblance to that God who is about to be your reward.” The youngest of the executioners, eighteen years old, held the King’s head high and let some of the blood splatter on the Abbé. He slipped through the crowd: “All eyes were fixed on me, as you may suppose; but as soon as I reached the first line, to my surprise, no resistance was made…. I was not permitted, on this occasion, to wear any exterior marks of a priest. I was absolutely lost in the crowd, and no more noticed than if I had been a simple spectator of a scene which forever will dishonour France.”

To read the entire article, click here. (Via Tea At Trianon)