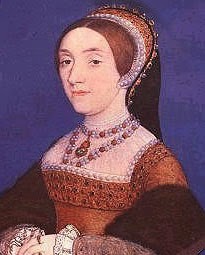 Was Katherine Howard really a willing party in her relations with her lovers, or was she a victim of sexual abuse? Conor Byrne, over at the Anne Boleyn Files, shares his views on this young Queen:

The early modern period, moreover, saw muddy distinctions between ‘persuasion’, ‘seduction’ and ‘rape’, all of which were terms to explain and describe coercion. When, in November 1541, Katherine confessed to her sexual relations with Francis Dereham, she testified that Dereham, ‘by many persuasions procured me to his vicious purpose’ and referred to ‘the subtle persuasions of young men and the ignorance and frailty of young women’. Historians have failed to consider the importance of language here. Lyndal Roper noted that the language used by men and women to describe sexual experiences was fundamentally gendered. As Warnicke noted in relation to Katherine, ‘not one of her comments indicates she enjoyed the affair with Dereham’, or, for that matter, Manox, since ‘a girl’s loss of maidenhead in a society esteeming virginity could result in emotional as well as painful physical issues’. Because she was a member of one of the premier noble families in the kingdom, in which family members were married off in prestigious alliances with other elite families, it does not seem likely that Katherine would heedlessly and unthinkingly have plunged with reckless abandon into sexual relationships with no consideration of her own, or her family’s, honour. From an early age, she would have been educated as to the importance of preserving her honour and modesty, in order to redound to the wellbeing and advantage of her family.

As today, consent in the early modern period was central. Describing instances of rape and sexual coercion necessarily involved a description of sex, which worked to the advantage of accused men, who sought to deflect an accusation of rape by asserting that they had enjoyed sexual intercourse with the consent of the woman concerned. This privileging of male testimony has remained continuous across time, for modern historians tend to assume that Katherine was lying when she testified that Dereham had raped her. Female victims were, moreover, disadvantaged by the cultural construction of ‘interior consent’, which assumed that reluctant women actually provoked rape and found pleasure in it. This advantaged male aggressors, who could seduce non-consenting women with the justification that their victims had enjoyed or desired their seduction.

Women who remained silent about their experiences were viewed with distrust or suspicion, since ‘a woman’s silence was interpreted as a form of collaboration with her assailant, suggesting her consent after the act if not before’. Because Katherine remained silent about her experiences until her downfall in late 1541, she was viewed as having encouraged her seducers’ advances. That she experienced distress and emotional turmoil, however, is clear from her confession, in which she informed Cranmer that ‘the sorrow of my offences was ever before my eyes’.