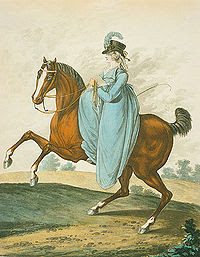 Regina Scott, over at Nineteenth Teen, has written an interest post about Alicia Meynell, the first woman jockey in England. To quote:

One day while she was visiting her sister, Alicia and her brother-in-law went riding. She was on her husband’s favorite horse, a brute named Vingarillo. Flint was riding his favorite, a brown hunter named Thornville. As they argued good naturedly about which horse was better, they decided to race to prove the point.

Nettled, Flint challenged her to a real race, at the Newmarket Race Track, and named a princely prize of 1,000 guineas (which would be equivalent to over $30,000 today!). I’m betting he thought she’d decline. Alicia accepted.

Immediately word spread far and wide. A woman? Racing? Who wouldn’t want to see that! They met on the last day of the York meet in August 1804. The York Herald reported that 100,000 people crowded the race track to watch, more than ten times the number that had assembled for the last “big” race between more famous horses. Even the military in the form of the 6th Light Dragoons was called in for crowd control. The total amount betted ran over 200,000 pounds (over $6M)!