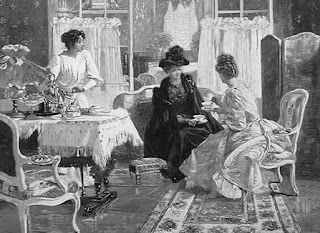 Over at Edwardian Promenade, author Evangeline Holland discusses the different rules of etiquette in England and America during the Edwardian period. To quote:

In England, there were two types of tea: “great teas” and “little teas”, with the “high” or “meat” teas coming under the former, and afternoon tea falling under the latter. High tea was largely a country institution, as the custom of late dinners during the London season interfered with the informality of country life. A “high tea” consisted of preserves, cakes of various times, hot muffins, crumpets, toast, and tea-cakes. A tray with the tea and its accoutrement were placed on one end of the table, and a tray with the coffee was placed on the other end. The sideboard held cold salmon, pigeon and veal and ham pies, boiled and roast fowls, tongues, ham, veal cake, and roast beef and lamb were there for the gentlemen of the party. In America, high tea took the place of dinner on Sunday evenings in cities, and were considered dinner in rural cities and the countryside. They were formerly fashionable in Philadelphia, where guests ate hot rolls and butter, escalloped oysters, fried chicken, cold ham, waffles, hot cakes, and preserves, and the hostess offered guests their choice of tea, coffee, or chocolate. Mrs. Sherwood doubted the popularity of high tea in America’s major cities, since “the custom of eight-o’clock dinners prevails.”

Afternoon tea was modified in England, since dinners were so late. It took place about five-o’clock, and the invitation was by card. The hostess poured the tea for her guests, and no plates were brought into the room except those large enough for cake or rolled bread and butter. Since the afternoon tea was an intimate affair, servants were usually dispensed with. The American hostess stood by her drawing room door to greet each guest, and in the adjoining room, usually the dining room, a large table was spread with a white cloth, and one end held the tea service, and the other, service for chocolate. Flowers adorned the table, and dishes containing bread and butter cut thin, and perhaps cake and strawberries were placed for consumption. Servants attended the tea to carry away soiled cups and saucers, and to keep the table looking fresh. In the summer, a bowl of cracked ice was included, for Americans loved iced tea!