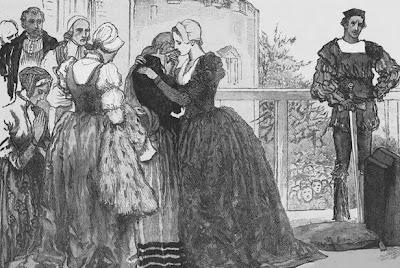 Why was the queen executed with a sword, rather than an axe? Historian Leanda De Lisle explains:

“As Henry’s sexual inadequacies were paraded during the trials, he responded by advertising his virility, staying out all hours, banqueting with beautiful girls. In private, however, he comforted himself in a different way, obsessing over the details of Anne’s coming death. In Malory’s Le Morte d’Arthur, Guinevere was sentenced to death by burning. Henry decided Anne would be beheaded with a sword — the symbol of Camelot, of a rightful king, and of masculinity. Historians argue over whether Anne was really guilty of adultery, and whether Henry or Cromwell was more responsible for her destruction. But the choice of a sword to kill Anne reflects one certain fact: Henry’s overweening vanity and self-righteousness.”