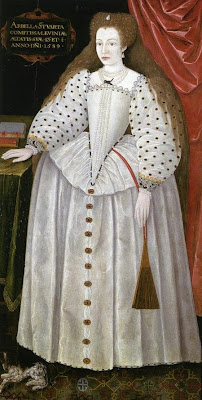 The Eagle Clawed Wolfe shares the little-known story of Arbella Stuart, granddaughter to both Bess of Hardwick and Margeret Lennox, Niece of Mary Queen of Scots, and a descendant of Henry VIII’s sister.

Then in 1610 in another misguided act of impressive boldness she married, in secret, Edward Seymour’s younger brother William, a man twelve years younger than the now 35-year-old Arbella. It is unclear if this was a true love match, but even if Arbella herself had given up any pretensions to the throne, any offspring would be potential claimants should circumstances change. This marriage was illegal without the King’s permission and both were arrested, he imprisoned in the Tower and Arbella, after a while held in London, was due to be sent north to imprisonment in the care of the Bishop of Durham.

In a quite impressive feat, they both managed to engineer simultaneous escapes he escaped from the Tower, seemingly disguised as his barber, whilst she gave her female attendant the slip at Barnet after feigning illness on the way north.

She rode to the Thames and after delaying (fatally as it turned out) waiting for William who had missed their rendez vous was rowed out to sea by some watermen (who promptly doubled their fee during the short trip). Avoiding the attentions of our Phineas Pett and others she boarded a pre-arranged French barque under a Captain Corvé and, delaying again for William, set sail for France. The delays however had been crucial and with English shipping alerted for the fugitive, the Pinnace “Adventure” caught up to Corvé’s ship, fired “Thirteen Shots Straight into the vessel” (More again) which promptly struck their colours and Arbella and her party were captured.