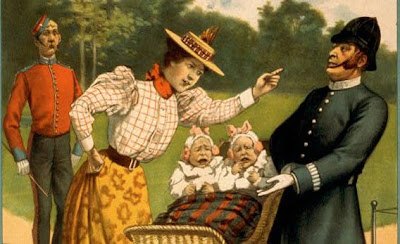 The Slate has a very interesting article about all kinds of bad baby advice given to parents throughout the centuries. To quote:

Before Spock’s 1946 book, a strict approach dominated baby advice books. Experts advised mothers to keep infants on schedules for feeding and sleeping. Holding them just for the sake of it was considered a sure way to produce what a 1911 text termed a “little tyrant.” As the U.S. Department of Labor observed in an “Infant Care” pamphlet in 1929, “a baby should learn that such habitual crying will only cause his parents to ignore him.”

Under the behaviorist thinking pioneered by psychologist John B. Watson and others, spoiling a baby was an immoral act that could forever curdle a child’s character. Watson advised parents “never” to “hug and kiss” their children. A 1916 book warned parents not to bounce babies on their knees, as it would spoil babies and lead to “wrecked nerves.” In general, wrote physician L. Emmett Holt in 1894, playing with babies was a bad idea: “Never until four months, and better not until six months.”

As late as 1962, well after Spock’s kinder, gentler approach had become a staple of nightstands across the country, a Miami pediatrician named Walter W. Sackett Jr. came out with a book called Bringing Up Babies, in which he implied that parents who failed to impose strict schedules on their babies were downright unpatriotic. Absolutely no night feedings, he wrote, no matter how young the baby, nor how much it cried. “If we teach our offspring to expect everything to be provided on demand, we must admit the possibility that we are sowing the seeds of socialism,” Sackett warned, likening overindulgent parents to Hitler and Stalin.

After World War II, commercial baby food producers as well as pediatricians drastically lowered the age at which they recommended babies start solids. Between the 1930s and the 1950s, much to the delight of Gerber and Beech-Nut, the average age at which parents introduced solids plummeted from 7 months to four to 6 weeks, according to various surveys. Sackett, the same guy who feared insufficient strictness would lead to socialist babies, was at the leading edge of this trend, writing in 1962 that breast milk and formula were “deficient,” and therefore babies should be started on cereal at 2 days of age. At 10 days, they could have strained vegetables, and by 9 weeks old, the little one would be eating “bacon and eggs, just like Dad!” Sackett also recommended giving babies black coffee starting at 6 months of age, to get them used to “the normal eating habits of the family.”