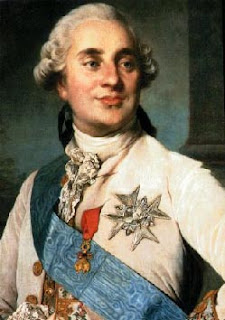 The new baby had troubles from the start. His wet nurse had no milk, but it was difficult to get her replaced because she was sleeping with the minister in charge of the royal household, the only person authorised to dismiss her. Short-sighted and consumptive in his early years, Louis-Auguste was the odd one out in the family. He looked different from his brothers. He inherited his fair complexion and bulging blue eyes from his Saxon mother and he had heavy eyebrows and hooded eyelids, and a weightiness and clumsiness about him. Bourgogne was boisterous and bossy, Provence was lively and amusing and Artois had charm and good looks. Berry was slow and introspective. Timid and evasive, he spent his time dancing attendance on the assertive Bourgogne, who cheated him when they played cards.

The Dauphin and Dauphine were extremely close and in fourteen years of marriage she bore him eight children and miscarried eleven times. The Dauphin took pains with the education of his sons, who had an array of tutors for scripture, Latin, mathematics and physics, history and geography, fencing and dancing. Young Berry was taught metalwork, which he loved, and carpentry, which he did not. Specially written plays were put on for the princes, but they were so full of moralising that they gave Louis-Auguste a lasting distaste for the theatre. The children were steered clear of the Enlightenment ideas of leading French intellectuals, that would help to kill Louis-Auguste in the end.