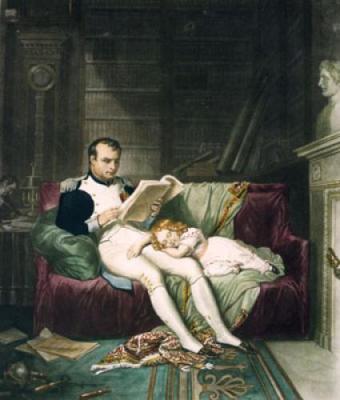 Over at Military History Now, author Shannon Selin talks about Napoleon’s love for reading and his favourite books. To quote:

According to his classmate (and later secretary) Louis Bourrienne, Napoleon read avidly from an early age. Whenever they had free time at the military school at Brienne:

[Napoleon] would run to the library, where he read with great eagerness books of history, particularly Polybius and Plutarch. He also especially liked Arrian, but had little taste for Quintus Curtius.

At the École Militaire in Paris and as a young artillery officer, Napoleon continued to read classical scholars, as well as more recent French and Italian authors. He also read a number of English works in translation. An idea of his favourites might be judged by what he chose to bring with him during a leave of absence in Corsica in 1786-87. His brother Joseph recounts,

[Napoleon] was then a passionate admirer of Jean-Jacques [Rousseau]; … a fan of the masterpieces of Corneille, Racine and Voltaire. He brought the works of Plutarch, Plato, Cicero, Cornelius Nepos, Livy and Tacitus, translated into French; and those of Montaigne, Montesquieu and Raynal. All of these works filled a trunk larger than the one that contained his toiletries. I don’t deny that he also had the poems of Ossian, but I do deny that he preferred them to Homer.

Napoleon soon parted ways with Rousseau, but his admiration for Ossian continued throughout his life.