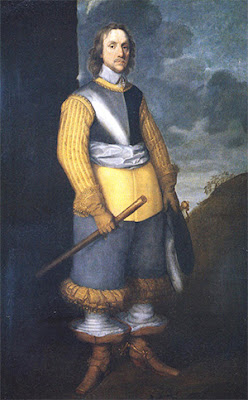 How did people dress at the court of Oliver Cromwell? History Today investigates. To quote:

The details may elude us, but there is every reason for believing that, while Cromwell occasionally adopted a sober manner, at court he followed more opulent fashions. Indeed, it would have been most odd especially in the eyes of foreign dignitaries – if he had not dressed splendidly in the state rooms of Whitehall or Hampton Court. Of course, there may be an element of calculation here. Cromwell may have dressed according to his audience, understanding that understatement was often more impressive. In this context, James Welwood’s later description of Cromwell dressing to suit the occasion seems to ring true: ‘He affected for the most part a plainness in his clothes; but in them, as well as in his guards and attendance, he appeared with magnificence upon publick occasions. It is interesting that the image that stuck in the minds of critics such as Colonel Alured, appalled by what they saw as Cromwell’s betrayal of the godly cause, was that of the Protector wearing ‘rich clothing … being embroidered with gold and silver”.

The notion that the court of Protector Oliver was not peopled by drab Puritans but by fashionable courtiers, and that Cromwell himself was also dressing modishly, fits well with the new view of the protectoral court which has emerged in recent years. Under Protector Oliver normal service had resumed, and this extended to the fads and fashions of the courtiers as well as to the buildings, ceremonies and trappings of the court. There is no doubt some truth in the notion that such opulence was driven by the dictates of international politics. As Britain became a major player in the world, there was a need to entertain foreign ambassadors, to keep up with the richest courts on the continent. Foreign influences were not the preserve of Charles II’s threadbare court in exile.