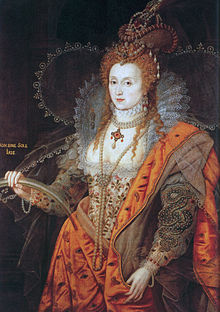 Did Queen Elizabeth I really hate other women? Over at English Historical Fiction Authors, Sandra Byrd debunks the myth. To quote:

There is no doubt that from time to time Elizabeth expressed, sometimes forcefully, her preference that her ladies not marry. Anne Somerset, in her biography, Elizabeth I, states, “The Queen’s opposition to her ladies marrying stemmed from more than mere jealousy that they should attain contentment of a sort that she would never know. Although she occasionally lamented her spinsterhood, simultaneously she entertained an altogether contradictory conviction that matrimony was an undesirable condition for women, a view not altogether surprising when one recalls that her father had executed her mother and stepmother, and the marriage of her sister had been a fiasco. It may well have been her early experience that instilled in her that instinctive aversion to the married state.”

While the Queen clearly enjoyed her power, she perhaps also keenly felt the loss of the kind of social and emotional intimacy that all people, and especially women, desire in a family. And yet she had no mother or father, no siblings, no husband, no children and her (Tudor) cousins all had claim to her throne.

Historian and author Antonia Fraser said, “Her [Elizabeth’s] household resembled a large family, often on the move between residences, and as a family it had its feuds when factions formed around strong personalities. It was not out of malice that Elizabeth opposed her maids of honors’ plans to marry, but because marriages broke up her own family circle.

The queen did, sometimes, help them to marry and marry well. Somerset says, “She (Elizabeth) could point out in the course of her reign no less than 13 of her maids of honor contracted prestigious marriages within the peerage, and this might seem to justify her claim that it was only unsuitable matches of which she disapproved.”