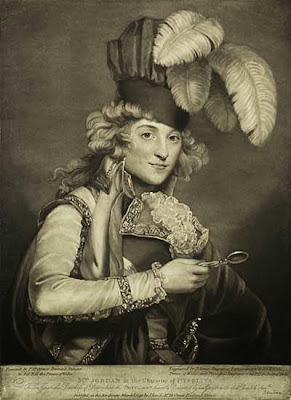 Heather Carroll on Dorothy Jordan, the 18th century famous actress who had a relationship with King William IV. To quote:

Meanwhile, she had become one of the biggest names in acting. She was a leading comic actress and was working out of Drury Lane. Because she had hot legs she would get cast in many cross-dressing roles, known as “breeches’ roles, which were usually written just as an excuse to show off actresses’ legs.

Maybe it was those famous legs that attracted William, Duke of Clarence, and later King William IV to Dorothy. The two fell in love and began their live-in relationship, which would last over 20 years and produce 10 children. Despite the scandal, the common-law couple lived became the examples of domestic bliss. Even stuffy King George didn’t seem to mind the scandalous couple because they were the model of loving, functional couple. Soon satirical prints veered from cracking jokes at Dorothy’s promiscuity to how she was, shockingly, a good parent.