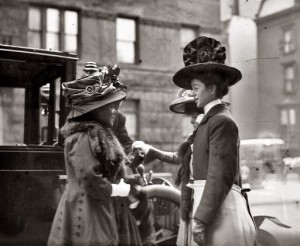 The Bartitsu Society reveals how hatpins were used by Edwardian women as self-defence weapons. To quote:

A wealth of evidence from the period demonstrates that hatpins were popularly regarded as secret weapons, and indeed as “every woman’s weapon” against the depredations of hooligans and ill-mannered brutes. Laws against hatpins of “excessive length”, or the wearing of hatpins without protective stoppers, were proposed in Hamburg, Berlin and New York among other cities. At least ostensibly, these laws were intended not so much to ban the use of hatpins in self-defence as to mitigate the incidence of accidental hatpin related injuries inflicted upon blameless fellow passengers in crowded tram-cars.

In newspaper articles and medical journals of the time, we find reports of women wounding male attackers via well-placed jabs with their hatpins. For example, according to a story in the New York Times of January 10, 1898, a Miss Sadie Hawkins assisted a Chicago tram-car conductor named Symington in fending off two determined would-be robbers by stabbing them both repeatedly in the arms and legs with her hatpin, causing the aggressors so much grief that they jumped off the moving tram to escape the onslaught.